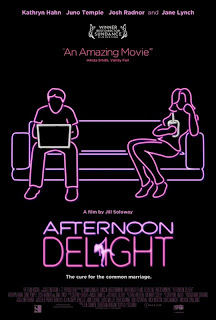 Filled with privileged, unpleasant characters acting out, Jill Soloway’s AFTERNOON DELIGHT plays like a bad Nicole Holofcener movie. If the wonderful social satirist and nonpareil humanist Holofcener ever made a bad film, that is.

One of the more inexplicably praised American indies of the year, DELIGHT won Soloway a directing prize at the Sundance Film Festival. But that doesn’t make her movie special, just the lucky beneficiary of--I’m guessing--residual guilt over the depressing dearth of female writer-directors working in today’s film industry. Or perhaps TV veteran Soloway (whose impressive producing credits include “Six Feet Under” and “The United States of Tara”) just had a lot of friends on the Sundance jury.

There have been plenty of good movies about the emotional meltdown of pampered, unfulfilled housewives. Sadly, this isn’t one of them. Tonally deaf and conspicuously lacking in either laughs or pathos, Soloway’s debut feature at least has some decent actors to help make it watchable.

Chief among them is Juno Temple who almost makes McKenna, her stripper/hooker with a heart of gold, less of a reductive, retrograde cliche than it is. In fact, it’s “full-service sex worker” McKenna who sets the creaky plot in motion. After visiting a strip club with hubby Jeff (Josh Radnor) to help jazz up their somnambulant marriage, Rachel (WE'RE THE MILLERS scene stealer Kathryn Hahn) spontaneously invites lap dancer extraordinaire McKenna to move in with them as nanny to their 5-year-old son.

What follows is less a SoCal variation on Pasolini’s great Marxist parable TEOREMA than a borderline icky dramedy that gradually escalates--none too convincingly--to flat-out drama after Jeff moves out and Rachel is forced to confront some spectacularly bad life choices.

Hahn and Radnor make a credible enough married couple. Secular-Jewish, comfortably affluent and hopelessly myopic, Rachel and Jeff could have stepped out of a ‘70s Paul Mazursky movie. What they’re unable to do is make these recognizable “types” remotely likable, appealing or even empathetic. As their equally misguided best friends, Josh Stamberg and Michaela Watkins are a little more successful in that regard, and Jane Lynch scores the biggest laughs as Rachel’s hilariously self-absorbed therapist.

Temple is the best reason to see “Afternoon Delight.” The 24-year-old British actress seems on the precipice of stardom after essaying a string of memorable performances in films good (KILLER JOE, MAGIC MAGIC), middling (THE BRASS TEAPOT, DIRTY GIRL) and terrible (THE THREE MUSKETEERS, JACK & DIANNE). She just needs to be a little more selective in choosing her roles. 2 out of 4 stars.
Posted by Milan Paurich at 12:01 AM