12 Years a Slave (now in theaters) 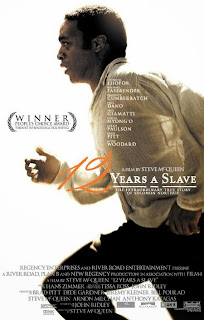 When criticized for the graphic depiction of the horrors of slavery in his film DJANGO UNCHAINED, Quentin Tarantino defended himself by saying (among other things – read more here if you like), “"When slave narratives are done on film, they tend to be historical with a capital H, with an arms-length quality to them. I wanted to break that history-under-glass aspect, I wanted to throw a rock through that glass and shatter it for all times, and take you into it.” He has a point, and while one can argue whether it's appropriate to take that approach in a film that is, first and foremost, meant as a cathartic work of entertainment like DJANGO was, there's no denying that it made an impact and got people talking. This year director Steve McQueen offers his take on the subject with 12 YEARS A SLAVE, a more sober and thoughtful film than Tarantino's that nonetheless offers more than its share of violence and brutality.

12 YEARS A SLAVE is based on the autobiography of Solomun Northrup (played in the film by Chiwetel Ejiofor), a free man who was kidnapped and sold into slavery in 1841 before eventually regaining his freedom a dozen years later. Solomun is at first sold to a reasonably decent plantation owner named William Ford (Benedict Cumberbatch). Ford may feel some degree of empathy for his slaves, but he's still a long way from seeing them as equals. Still, he does try to show Solomun, now rechristened as “Platt”, some kindness. However those acts of kindness only infuriate Ford's overseer Tibeats (Paul Dano), who sets about making Solomun/Platt's life on the plantation as miserable as he can. Ultimately Tibeats becomes so incensed with Platt that he tries to kill the man, leaving Ford no alternative but to sell Platt to another plantation.


Life on the Ford plantation is like an idyllic interlude compared to the way things are under Platt's new master, Edwin Epps (Michael Fassbender). It is on the Epps plantation that Platt meets Patsey (Lupita Nyong'o), the best field hand there by far. She is also forced to submit sexually to Epps, which in turn earns her further abuse at the hands of Epps' wife Mary (Sarah Paulson). Platt suffers considerably on the plantation as well, not just physically from the harsh work conditions and occasional brutal beatings, but psychologically from the day to day horrors he has to witness, and is at times even asked to perform.


And yet for all the horror we witness, McQueen's arthouse visual sensibility has a tendency to distance one from the material. Perhaps not to the point of trying to repair Tarantino's broken glass, but he at least seems inclined to sweep up the shards. Nor does the all too typical score by Hans Zimmer, complete with a modified but still very recognizable version of his trademark “INCEPTION horns”, help. What ultimately saves 12 YEARS A SLAVE from being yet another “at arms length” slavery film is the inherent power of John Ridley's screenplay, and of course the source material itself.


And then there are the performances, which keep the audience emotionally connected even when McQueen's direction feels detached. Ejiofor has an acting style I could best describe as effortless. You never see this guy acting; he just becomes his role. I've been a big fan of his ever since I saw him play the lead role in the David Mamet sleeper REDBELT. Other than that he's mostly had supporting roles in a wide range of films both big and small, but with the work he does here I'd be surprised if he doesn't start getting more high profile lead roles. Fassbender is excellent, too, conveying a sort of casual, clueless evil that has convinced itself of its righteousness. There are few if any redeeming qualities to his Epps, and yet he never comes across as a one dimensional cartoon villain. About the only misstep is the casting of Brad Pitt in a small but pivotal role. It's not so much that he's bad as it is he's so obviously Brad Pitt in a movie in which none of the other actors, be they known or not, call attention to themselves.


To be sure, there's very little in this film that would qualify as “entertaining” unless you're a sadistic racist, but that's as it should be. Just as with a film like SCHINDLER'S LIST, 12 YEARS A SLAVE brings a dark chapter of history to life in a very visceral, emotional way. Tarantino's DJANGO UNCHAINED may well confront the audience more aggressively with just how dark a chapter it was, but given that it's in the context of an action/revenge exploitation movie it doesn't exactly qualify as a reliable history lesson. 12 YEARS A SLAVE may take a step or two back, but it still gives its audience a more reality based look at plantation life that is still for the most part unvarnished, and also shows just how perilous it was to be a even a free black man during the slave era. 3 1/2 out of 4 stars.