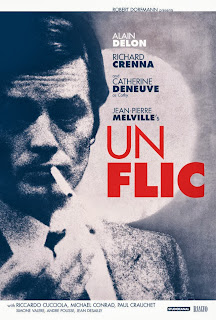 Picture's called UN FLIC, huh? So it took the French to make a whole movie about the sidekick from A CHRISTMAS STORY? It figures, Paramount having just laid off every employee not in the public domain. That LONE RANGER bomb is bringing everyone down. I think it's gotten more people laid off than Obamacare.

No, UN FLIC (AKA DIRTY MONEY) is, rather, a terse 1972 cops-and-robbers picture by ace French director Jean-Pierre Melville, a specialist in no-nonsense crime dramas. He also took the last name `Melville,' in tribute to the great American novelist Herman Melville, which is worth mentioning as perhaps the last nice thing any French person had to say about an American who wasn't Jerry Lewis or Mumia Abu-Jamal.

Oh wait, there's another: John Ewing, director of the Cleveland Cinematheque, who was actually knighted a few years ago by the French government for his contributions to spreading French culture via his tireless promotion of Gallic cinema at the Cleveland Musum of Art and the Cleveland Cinematheque. Either that or the French somehow got the idea Mr. Ewing once shot a white Philadelphia policeman. One of those two. Sorry, it's been a bad week. I didn't even get a lift out of the illusion that the Indians baseball team had a chance at the World Series.

So UN FLIC is one of those French cultural imports gracing University Circle. Melville directed in a dispassionate, all-pro style - maybe too dispassionate at times. Reviewers have crowed about Melville being a precursor of everyone from Quentin Tarentino to Wong Kar-Wai, but I'm afraid I just don't see it, especially in this procedural with a surfeit of stoic hard guys and outlaws.

It starts with the robbery of a seaside French bank during a storm. In the fancy-meeting-you-here dept., mastermind of the robbers is American actor Richard Crenna - yes, for viewers of my blighted generation, Rambo's commanding officer - as Simon, a nightspot owner with aspirations to do a really big score with his partners (who include a 60-year-old executive apparently being cut by his firm - some things never change, huh?). Simon hatches an elaborate heroin-smuggling plan, the setpiece is (really the part of the picture Melville seems most excited about) a Mission-Impossible type deal to intercept a hired courier on board a moving train in between stations. This sequence goes down pretty much in real time, and just in terms of a cool caper it rivals the split-screen heists in Norman Jewison's THE THOMAS CROWN AFFAIR (though it's a little wild when Melville clearly uses fx miniatures; one really expects Godzilla to clomp into the frame).

The rest of the narrative feels a bit blah. This was, in fact, Melville's final film before his 1973 death, and am I wrong in thinking he's kind of going through the motions? "Flic" is French underworld slang for `cop,' so the real star of the movie (even though he's actually on screen very little) is French superstar Alain Delon, as an inspector whose networks of informants includes his own lover, Simon's moll (Catherine Deneuve). So, one way or another, the `flic' pretty much has the lawbreakers wrapped up in the end, even if he never can figure out how they got the heroin off the train. Thus there's a sense of fatalism, futility and even regret at
the denouement, and no particular satisfaction that justice has triumphed. Or is it just Melville feeling his mortality? Or Cleveland sports fans telling themselves once again to wait until next year?

Say, anyone ever notice the resemblance between Catherine Deneuve and longtime Cleveland anchorwoman Wilma Smith? Perhaps Wilma is another long-lost Dorleac sister, who abandoned her country, changed her name and her heritage, and constructed an elaborate false identity, just to relocate to this sad city and watch LeBron lead the Cavs to the championships. In which case, sorry, hard luck. Oh well, there's always the Indians and the Browns. (2 3/4 out of 4 stars)