[THE TRIALS OF MUHAMMAD ALI screens Friday October 18th at 7:00 pm and Sunday October 20th at 1:30 pm at the Cleveland Museum of Art.] 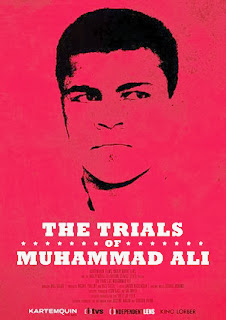 We like our heroes to be simple, with all the rough edges polished smooth. Muhammad Ali was not a simple man, but we tend to have an image of him largely based on the broadest aspects of his seventies heyday. It was a period when he was not only hugely successful as a fighter, but as a media figure in general. We remember him verbally sparring with Howard Cosell, bragging about being the greatest, hurling witty insults at George Foreman, and appearing as a pitchman for D-Con. Ali was even transformed into animated form for a children's Saturday Monring TV series.


It's an image of an all-American hero with appeal across racial and generational lines, but it leaves a lot out. Notably it omits the early years and struggles that Ali went through to get to that point. It is those early years that the documentary THE TRIALS OF MUHAMMAD ALI (produced and directed by Bill Siegel) looks at, with the primary focus on how a young Olympic gold medalist by the name of Cassius Clay found his way into the Nation of Islam, changed his name to Muhammad Ali, and seemingly threw away his career by refusing to serve in Viet Nam.

These early years in Ali's life are crucial to who he was and why he mattered, and show how a person can evolve their thinking over time while still maintaining integrity. One can disagree with some of the positions Ali took at the time, whether it be going along with Elijah Muhammad's belief that all white people were “devils”, or his refusal to be drafted, but it is impossible to deny his courage or convictions.


It's also fascinating to see the attitudes of various cultural figures at the time. The film begins with a particularly caustic assessment of Ali by Hollywood producer David Suskind, and we hear other voices both white and black (including some members of Ali's own family) state their disapproval for what he is doing. We do also hear from some of those who were on his side, including Martin Luther King, Jr., but overall public opinion was pretty negative for a man who just a few years later would be so widely beloved.


And then there's the actual court case determining whether Ali is legitimately a conscientious objector which went all the way to the Supreme Court. I don't think it's much of a spoiler to say that Ali didn't have to go to jail for his beliefs, but the particular way in which that decision was reached is quite interesting. So is this movie, and anyone with an interest in American history should see it. The film is scheduled to air on PBS stations as part of their POV series, but films often tend to be edited down to an hour to fit in a time slot. This one should be seen in its full length version if possible. 4 out of 4 stars.