[THE RAPE OF EUROPA screens Sunday November 3rd at 1:30 pm at the Cleveland Museum of Art Morley Lecture Hall.] 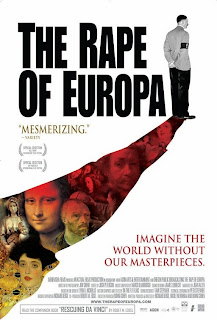 I believe I've applied more than once over the decades to work in the public-communications department of the Cleveland Museum of Art. Never got an interview, maybe not even acknowledgment. Well, the Museum's PR squads were in damage control overtime this week, over the front-page headlines of a sordid scandal involving former CMA Director David Franklin. Apparently, adultery and suicide were components. Not a pretty picture, to coin a phrase.

Perhaps I set my sights too low, aiming at a publicity job; they should have hired me as Museum director. I got some schooling, and I know how to tell Japanese kabuki scrolls from Dogs Playing Poker, and so I would hang those in the appropriate places. Worst I would do as Cleveland Museum of Art director: I'd probably sneak into the Armor Court after hours and make silly videos to post on YouTube. I'd be in a loincloth and big boots and wave a giant sword around and act like a Robert E. Howard character, bellowing challenges to the exhibits. "I AM KONAN! YOUR METAL-CLAD WARRIORS DO NOT DAUNT ME! RELEASE PRINCESS BOSOMIA AT ONCE!"

I think the average Clevelander would greatly enjoy that. More so than Glazen Creative's short video of local sports coach Mike Hargrove touring the pre-scandal Art Museum, anyone remember that outreach to Joe Sixpack?

Anyway, the exhortation is now to let the healing begin, everyone come and enjoy the golden jewel of University Circle, blah blah blah. I can tell you at least one component of the Cleveland Museum of Art that seems to be untainted, and that's the CMA film series, which hasn't yet followed the CMA and the rest of Cuyahoga Country into flagrant corruption. Probably because series coordinator John Ewing has never followed my programming advice.

His revival this week: THE RAPE OF EUROPA, a 2009 documentary epic with a natural tie-in to the upcoming Oscar-bait historical drama MONUMENTS MEN. Based on the book by Lynn Nicholas, THE RAPE OF EUROPA tells quite a story, about the fate of European art treasures during WWII, both on the Eastern and Western Fronts, after the Wermacht was unleashed on Poland in 1939.

The movie (narrated by actress Joan Allen) is, if anything, overstuffed with detail that a thick book can more gracefully contain; you can suffer a veritable Stendahl syndrome (mental overload after overexposure to art - also title of a Dario Argento horror flick) here from the sights, sounds, themes and shifting vistas and battlefields.

Rising to power as a megalomaniac conquerer/messiah of the Aryan race (Hitler, I mean), the dictator planned in meticulous detail a mighty museum in the town Linz that would display all the great art treasure of the ages that the Thousand-Year Reich would capture from its enemies. German soldiers in special units marched into battle in Poland with shopping lists. Heroic efforts by common citizens
and comrades in Paris and Leningrad strove to hide most of the artwork, in
the south of France and Siberia, before the Nazi marauders could strip/destroy as they had in Warsaw and Cracow.

Hitler was still insanely planning the Linz museum right up until his final  days in the Berlin Bunker. Governments and galleries to this day fight it out in court over who has proper ownership of some of the countless paintings, sculptures and relics recovered after V-E Day, and many pieces remain lost. From time to time the documentary cuts to one of those ongoing imbroglios with the surviving witnesses, lawyers and arts-and-culture ministers on both sides, and that really brings the saga  home.

(It's a great proud-to-be-an-American moment (infrequent in documentary films circa the Bush era) when a museum in Utah finds out its prized Bouchet canvas was looted and returns it to original gallery-owner's descendants without argument. Maybe Romney should have won the White House after all, or were you way ahead of me with that?)

Still, as US troops drove into combat, it became a dilemma for Gen. Eisenhower how to bomb the Axis powers without obliterating the priceless artifacts. Some treasures were saved by pure luck, others by tight-focused surgical strikes that sought to drop the bombs while purposefully avoid the hoardings, museums, galleries and monuments. Even with art historians embedded with the troops to ensure the cultural heritage of Europe survived, many a G.I. and officer bristled at the idea of putting antique paintings ahead of men's lives. THE RAPE OF EUROPA never mentions it, but a couple of Hollywood war pictures later dramatized this theme, John Frankenheimer's THE TRAIN and  Sydney Pollack's CASTLE KEEP.

Amazingly, Luftwaffe Field Marshall Hermann Goering was an unintended savior-figure. Undiscriminating in his desire to accumulate and build his own collection, he took in and thus preserved a trove of works Hitler and his cronies would have considered too "degenerate." And, as the vengeful Red Army pushed into German territory, the Russians gave as good as they got. Stalin's "Trophy Squads" carted Teutonic treasures back to the Soviet Motherland, where many now remain.

It might have been fair (but widened film's already wide net still further) to mention that strategic art plunder was also carried out by Napoleon, by the British Empire, by imperialists all the way back to the Rome of the Caesars, and probably before that. I know that because I read books on it.

I like saying my favorite genres of art are (1) forgery (2) theft and (3) plunder. I would have made a hell of a museum director, I tell you. Maybe on second thought I indeed would have trashed some of the suits in the Armor Court - but only as performance-protest against further lousy IRON MAN sequels. (3 1/2 out of 4 stars)