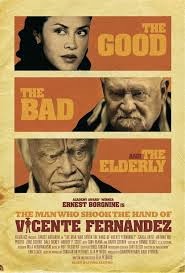 I'm still pretty bummed that veteran cult and horror-movie bad guy Richard Lynch (who got to do terrible things to a virtually-unknown Al Pacino in SCARECROW) was left out of the annual roll-call of illustrious deceased of 2012 at the most recent Oscars. And it will be amusing to see who in showbiz who lately passed away gets snubbed at the Academy Awards necrology next time. James Gandolfini? Dennis Farina? Ray Harryhausen? Roger Ebert? Just goes to show what happens when you don't pay those Church of Scientology membership dues.

At the rate the mourning is coming for that Monteith kid (having never watched Glee I couldn't even say I'd ever heard of him), maybe he'll just be a designated stand-in for everyone in entertainment who took their last bows in 2013, kind of like the Unknown Soldier with gay cred.

At least the late Ernest Borgnine has a whole feature that amounts to a big, sloppy love note saying goodbye to the durable and distinctive trouper, - who left us in July of last year at 95 - from a novice filmmaker, Elia Petridis. If THE MAN WHO SHOOK THE HAND OF VINCENTE FERNANDEZ isn't exactly ON GOLDEN POND, it's not exactly RADIOLAND MURDERS either (in which an ailing George Burns was most obviously body-doubled for a truncated farewell...come to think of it, UK comic Mel Smith, who directed RADIOLAND MURDERS, himself died this year). Borgnine is onscreen practically for this entire production, which is not too shabby for a 94 year old. More than I could do right now, and I'm only, what, 78 (no, but just feels that way).

Borgnine plays Rex Page, a retired radio DJ, now languishing in southern California, nursing a lifelong grudge he never broke through to Hollywood acting, especially in the cowboy pictures he loved.
Failing health (just like in that old TV ad with the senior folks, he falls and HE CAN'T GET UP!) lands Rex in an ill-managed assisted-living facility. Page is at first a borderline-racist curmudgeon to the downtrodden Hispanic nurses and physical therapists - until they learn the old guy, during his radio glory days, once met the Vincente Fernandez mentioned in the title, a Mexican mariachi-music legend. Then the low-echelon staff hold the crusty newcomer in awe. Meanwhile Rex still determines to try to land a speaking part in a new oater.

Page's newfound celebrity status among the hombres and senoritas put him at odds with his neglected family and the meanies at the top who run the nursing home, in a talky script that kind of free-ranges. The movie's a mock neo-western, a codger comedy-drama, a family tearjerker and a sunset homage, and Petridis does shovel a lot of emotions to the fore rather arbitrarily.

But still, I defy anyone not to get a little misty-eyed at his staging of the sweet magical-realist sentimental conclusion, surely one of the most worshipful farewells any actor could ever ask for (or receive). DVD commentary and behind-the-scenes raw video reveal that Elia Petridis (who also wrote the script) is as achingly young as Borgnine is old and wizened. The Petridis claimed that he made a deliberate choice to shoot in old-school 35mm celluloid (which looks lovely, by the way) as a tribute to Borgnine - no computer-digital emptiness for Ernie.

Now that's a nice salute. Given technology, there are superstars today who won't be able to get that sort of tribute in future decades if they survive the substance abuse, see-saw weight loss and rampant plastic surgery to ever make it to their 90s. Adios, Ernest Borgnine, whose career stretched back to the great age of the Hollywood studios and the infancy of TV drama. And thanks for the memories. (2 1/2 out of 4 stars)