[THE LOOK OF LOVE screens Saturday November 2nd at 9:35 pm and Sunday November 3rd at 4:00 pm at the Cleveland Cinematheque.] 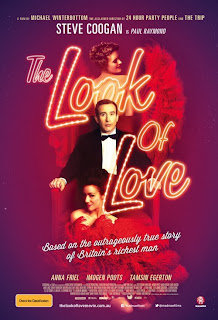 While there's no doubt Britain has its share of blue noses and moral guardians tirelessly working to keep Britons safe from smut, to a large degree the U.K. has found a degree of acceptance for “naughtiness” so long as it stays within certain boundaries. That's why THE LOOK OF LOVE, a biopic of British burlesque impresario and magazine publisher Paul Raymond (played by Steve Coogan) doesn't follow the same, “is he a hero of free speech or a destroyer of morality” through-line found in films about his American counterparts like Hugh Hefner and Larry Flynt. Occasionally Raymond would push up against and even cross his culture's boundaries and wind up in minor trouble, but generally it all worked out according to his belief than any publicity is good publicity. Raymond's most formidable enemy, it seems, was himself.

The film introduces us to Raymond as he is leaving his daughter's funeral, then flashes back to the fifties (in black and white) when his empire of sex was just getting started. Raymond's wife Jean (Anna Friel) is more than a good sport, raising the couple's children, actively supporting her husband's bawdy business, and even condoning Raymond's dalliances with many of the strippers in his employ. Perhaps inevitably, though, one of those dalliances turns into a full blown affair when Raymond becomes smitten by Amber St. George (Tamsin Egerton). Jean still tries to reconcile with her husband for the sake of the children, but ultimately winds up filing for divorce and getting what, at the time, was the largest divorce settlement in British history. Whatever Raymond's real feelings, he hides them behind his usual jolly facade, joking that if he can afford to pay that much out, he's done pretty good for a guy who started with practically nothing.


And really, we never do see how Raymond is feeling beneath his facade as the film follows his rise and fall, seemingly learning little if anything from the experience. For someone who was a showman and a libertine, he comes off here as almost shockingly reserved. On occasion, Raymond does dispense some choice wry witticisms which Coogan, a gifted comic actor, makes the most of, and there's some fun to be had in the film's recreations of Raymond's sexy shows and magazine shoots. It's obvious director Michael Winterbottom has a fondness for this era and it's almost innocent brand of erotica, but his central figure is so bland that the film never really comes to life. 2 1/2 out of 4 stars.