31 Days of Halloween 2013: The Haunting (October 26th and 27th at the Cleveland Cinematheque)

[THE HAUNTING screens Saturday October 26th at 7:25 pm and Sunday October 27th at 8:50 pm at the Cleveland Cinematheque.] 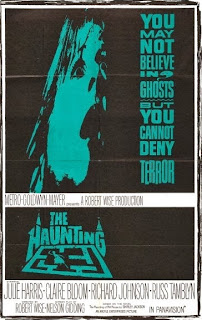 Are you the sort of person who craves a genuinely scary movie, but without all the blood and gore? Then look no further than Robert Wise's THE HAUNTING from 1963, based on Shirley Jackson's novel The Haunting of Hill House. THE HAUNTING is shot in rich, silvery black and white and generally suggests its horrors rather than showing them. By this time Hammer films had already changed the face of horror films by reviving the classic movie monsters like Frankenstein and Dracula with a greater emphasis on sex and violence, and independent films like H. G. Lewis' BLOOD FEAST went even further. Compared to such contemporaries THE HAUNTING may seem old fashioned on the surface, but in its themes and ideas are actually far more modern and adult.

The plot is set in motion when parapsychologist Dr. Markway (Richard Johnson) tries to assemble a hand picked team of researchers with personal experience with the paranormal to investigate spooky old Hill House. Only two of his chosen six team members actually show up. Mousy and insecure Eleanor (Julie Harris) had been caring for her sick mother until her recent death. She may or may not have some king of telekinetic abilities. Her opposite is the confident Theodora (Claire Bloom), who is apparently psychic. The final member of the team is Luke (Russ Tamblyn), a young, devil may care sort who stands to inherit Hill House some day, and wants to make sure no ghost stories keep him from capitalizing on the property. Once at the house, the team members all start experiencing strange phenomenon. The question is, is the house causing these strange manifestations, or Eleanor subconsciously using her telekinetic powers? Either way, it's a pretty spooky ride

The direction by Wise, easily one of the finest, most prolific, and most diverse American directors of all time, whose credits include such classics as THE DAY THE EARTH STOOD STILL, WEST SIDE STORY, and THE SOUND OF MUSIC just to name a few, is nothing short of masterful. Which, given that he cut his teeth as a director working for “quiet horror” specialist Val Lewton directing CURSE OF THE CAT PEOPLE and THE BODY SNATCHER, is only to be expected. The cast is top notch as well, and while the acting style may seem a bit stagey by today's standards, there's no denying the intensity and authenticity of the performances. What else can really be said about a film that has been as extensively praised and written about as this one?


There are, of course, those who find the film too subtle to be effective. They say they need to see something to be scared, to know concretely what it is that is terrorizing the occupants of Hill House. All I can say to that is, in the real world, it is far more often the unknown than the know that frightens us. And if any film ever captured the fear of the unknown on camera better than this one, I don't know what it might be. 4 out of 4 stars.