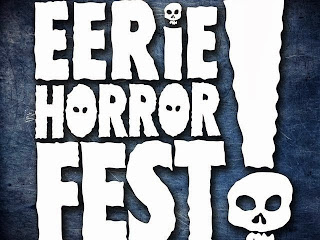 Ever since LeBron left, the most significant thing about Cleveland is, we can all agree...Well, no there's really nothing. LeBron took all our hopes and dreams with him. There is only emptiness and futility left now. I received a schedule of the upcoming Ohio Independent Film Festival slate of entries and it even has a whole documentary devoted to LeBron's "Decision" to flee and the impact upon this beknighted metropolis and
Cleveland's "recovery" from the humiliation. Kind of like the way addicts and alcoholics are in "recovery," I fear, the sort of "recovery" that goes on forever. Like the recession here.

Well, I guess the Ohio Independent Film Festival is the one thing significant about Cleveland now that LeBron's gone, but it's still several weeks away. How to occupy your time in the meanwhile? Maybe consider a Halloween-themed movie festival that allows a nice, non-taxing road trip out of this desperate, LeBron-less town?

It's the Eerie Horror Fest, happening right over the Pennsylvania boarder in Erie, PA. Yes, you have to drive though Melonhead territory around Mentor/Kirtland
and Harlan Ellison territory around Painesville, but Ellison (like LeBron) left the state long ago, won't likely be on the road to terrorize you.


But guests at the Eerie Horror Fest will. They include Oscar-grade actor Eric Roberts (whose work in the chiller genre include Larry Cohen's delightfully quirky little THE AMBULANCE and Christopher Nolan's THE DARK KNIGHT), UK actor Doug Bradley, best known for his recurring role of the lead
cenobite in the HELLRAISER movies, memorable sci-fi bad guy Vernon Wells (THE ROAD WARRIOR, INNER SPACE, CIRCUITRY MAN, etc.) and C.Thomas Howell, from E.T. - THE EXTRA-TERRESTRIAL and the first and best RED DAWN.

There will be a special screening of a rare Clive Barker movie property, made in the wake of HELLRAISER, that just didn't hit it with critics or audiences, NIGHTBREED. Virtually ignored, the 1990 picture, based on the novel Cabal, about a cemetery/sanctuary of sympathetic, monstrous beings, has lately gotten the "director's cut" restoration treatment. It's even got filmmaker David Cronenberg in a rare major acting role (as a serial-killer psychiatrist), and, with some of the filmmakers and actors slated to drop in for the screening, should be on top of any cult fan's list.

Also being screened, with the co-directors attending: ADJUST YOUR TRACKING, the new documentary about the golden era of VHS cassettes (especially in light of its impact on B-horror and
fantasy movie production/distribution) and those devotees who keep the obsolete tape-analogue format alive.

Now in its ninth year, the Eerie Horror Fest happens at the lovely Warner Theater, on Friday from 3 p.m. to 1 a.m., Saturday from 10 a.m. to 1 a.m., and Sunday from 10 a.m. to 8 p.m. Admission
ranges from a $30 all-access pass, to individual one-day admissions of $10 to $15. It also incorporates workshops and screenwriting contests. Perhaps this is where one can sound out Doug Bradley about a HELLRAISER: PINHEAD VS. THE MIAMI HEAT. No, we can't let the LeBron thing go, we just can't.

For full information about the Eerie Horror Fest, go online to the not-so-obvious website www.andyflatley.com
Posted by Charles Cassady Jr. at 12:00 AM