*Editor's Note: We recently got an email from STRONGMAN director Zachary Levy letting us know that his film, which originally played Cleveland back in June of 2011, has just been released on home video and "on demand". It's an overlooked gem and we felt that, since a movie like this doesn't have a multimillion dollar hype machine behind it, it warranted a repost of our original review with the hopes that some of you might check it out now that it's more easily available. 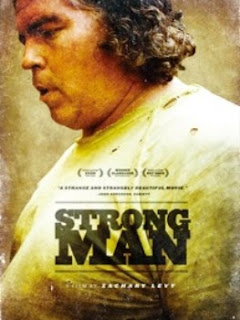 Hey, I actually have readers here at the Cleveland Movie Blog. We got e-mail from England asking me for contact information for filmmaker and occasional guest contributor Chip Karpus, regarding his infamous short subject Frankie of the Head, about a young man with multiple sclerosis who courageously does not let his crippling disability prevent him from being...a complete pain the ass to everyone around him. The reader wanted to know if the documentary was a mockumentary or not. I have readers!


Okay, the painful truth being ignored here is that the reader was interested in Chip Karpus and his work. Not me. Not me at all. Still, in the is-it-live-or-is-it-Christopher-Guest question that hangs many a documentary about extreme personalities, I would invite this Englishman to puzzle over STRONGMAN, a feature from newcomer Zachary Levy. I'm not saying I know one way or another it's scripted. Just that Levy's huger-than-life subject and his surrounding entourage and their dialogue are so mordantly amusing that they could easily come from the mind of an ace writer - maybe John Patrick Shanley in a Chuck Palahniuk mood - and Levy got their most private and painful moments on camera.


The titular strongman is Stan "Stanless Steel" Pleskun - of South Brunswick, New Jersey, a burly, middle-aged guy with a mullet. He's a professional strongman, lifting cars in parking lots, pounding nails with his hands at private-booking kiddie parties, raising platforms of people on British TV with one finger, and, in his personal specialty, he bends coins in his big hands, turning one mangled penny into a two-year anniversary present for his chain-smoking spouse Barbara.


Unlike Anthony Quinn's famous, hard-drinking, abusive strongman in Fellini's LA STRADA, there doesn't seem to be real cruelty in Stan. But the big guy gets pretty moody and cussing as he pines for something more meaningful in his "craft," shoulders mounting domestic friction with Barbara (a former aspiring beauty queen with a sister with whom Stanley clashes) and harbors professional envy for flashier, better-paid, pseudo-strongmen in Cirque du Soleil and other venues of showbiz.


I wouldn't call Stan stupid (no...no Stan, it wasn't me; it was that mean Bob Ignizio, it was! I swear it! Break him in two instead), but he has an expressive Hanna-Barbera face that registers every emotion in slo-mo, be it pride over his homemade costume-sweatshirt, strain during a stunt, chagrin at being ripped off by a promoter, or angst that the years are passing and he has only a short time of useful strong-man-hood left to make it anywhere near the big time.


Stan avidly watches The Honeymooners, and after a while he really comes to resemble Ralph Kramden reborn as a horseshoe-bender. [SPOILER ALERT] No, he never threatens to send Barbara - pow!- to the moon (and this man looks like he really could do it, too), but, in light of Stan's brother's increasing addictions and binge-drinking with buddies, Stan and Barbara's relationship crumbles. Stan even sings to Barbara (in tune no less) and gives her healthy diet tips on the day he leaves.


It would probably to too-exquisite blurb copy to say that this movie held me in a vice grip - Stan even owns the same "Bud Man" wall poster I did (and, in another coincidence, I occasionally tour and do children's parties with my famous "weak man" act). As a character study STRONGMAN really is remarkable, like one of those minor characters repped by Woody Allen's titular agent in BROADWAY DANNY ROSE got to tell his own tale. But I still had to wonder, even with an end credit thanking Stan and Barbara for their courage in being so vulnerable onscreen...can this movie really be trusted? It concerns, after all, a showbiz wannabe focused on his image and career, trying to get ahead. A documentary vehicle like this is exactly what the onscreen Stan would use to get his name out there. Dare I suggest that what we are seeing - the breakdowns, the blowups, the grotesque family types - is slightly amped-up and contrived especially for filmmaker Levy's cameras (PUMPING IRON was)?


Indeed, Stan's ups and downs are so hard to watch at times that I rather hope some of this was scripted. Or maybe it's even me, jaded by too much pop culture (`Stan Pleskun'...sounds a lot like `Snake Plissken,' doesn't it?) that I can't see the genuineness in this film for all the fakery in its inferiors. Call it the curse of Snooki, `the Situation' and that whole Jersey Shore rabble. (4 out of 4 stars if it's for real)
Posted by Bob Ignizio at 12:00 AM