Repost: I'm So Excited (October 12th and 13th at the Cleveland Cinematheque)

[I'M SO EXCITED screens Saturday October 12th at 7:35 pm and Sunday October 13th at 4:15 pm at the Cleveland Cinematheque.] 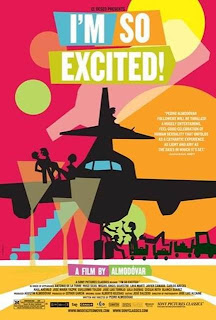 Despite my unabashed love for the bulk of Pedro Almodóvar's films, the heightened reality of this latest comedy flies so high into thin air that you may need supplemental oxygen. The plot concerns the incredibly flamboyant flight crew and a motley collection of first-class passengers on a plane awaiting clearance to attempt a crash landing. All of the economy-class passengers have been drugged into unconsciousness by the stewardesses in order to avoid mass hysteria while those not in the cheap seats use the only functional in-flight phone to seek last-minute remedy for their libertine lifestyles. To facilitate the characters' compulsive openness, the phone inexplicably airs their dirty laundry over the cabin's PA system, allowing all on board to get involved in the personal affairs of a crooked banker (José Luis Torrijo), a womanizing actor (Guillermo Toledo), and a celebrity dominatrix (Celia Roth). The attendants and pilots similarly serve up their convoluted private lives for public scrutiny - ostensibly as means of distraction - with their worlds mainly revolving around who gave who a blow job. Meanwhile everyone begins fretting the increasingly dire prognostications of a horny psychic virgin whose dopey innocence does not survive the third act without succumbing to the lewd milieu.

Almost certainly a broad allegory exists here related to the Spanish financial crisis: with the sleeping commoners, a self-indulgent upper class, and of course, the impending crash. Eventually, those made aware of the dire situation are supplied mescaline-laced "Valencia cocktails," possibly referencing the new and still unused Castellón Airport there, which has become a famous symbol of wasteful government spending. I'll admit that my knowledge of Spain's political and economical woes is as lacking as my grasp of the subtle nuances of the Spanish language, which may be why much of the comedy and commentary flew over my head. However, apart from what may have been lost in translation, and that which languishes unheeded without cultural context, there is little here of substance. The jokes feel uninspired and borderline juvenile, and the overall tone of the film failed to woo me with its indiscreet charm. Almodóvar does avoid the usual disaster movie yawnfest of heroes and invalids grasping for deeper meaning amidst camera-jostling turbulence by having them instead banter mostly about penis-related matters, which I'll admit does highlight the absurd frivolity of the human condition. The characters grow more and more sex-mad in this farce of death that peaks with a colossal inorgasmic groan when the flight attendants lip synch the entire Pointer Sisters song referenced in the film’s English title.

In the past Almodóvar has almost always deftly bridged the chasm between ridiculous serendipity and emotional gravitas, but here the whimsical proceedings seemed much more desperate and silly, with little in the way or point or pay-off. It's like Dada gone Gaga in a manner blandly auto-tuned to the zeitgeist. As much as it hurts me to say it... 2 out of 4 stars.