[HOTEL TRANSYLVANIA screens Friday October 18th and Saturday October 19th at the Aut-O-Rama Drive-In as part of their Retro Halloween Weekend quadruple feature. Box office opens at 6:00 pm both nights with costume contests, "trunk" or treating, and more. Movies start at 7:30 pm. For a complete schedule of movies and events visit http://www.autoramadrivein.com/] 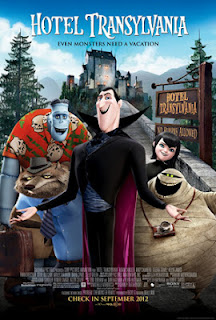 The world is a scary place—even for vampires.

After losing his beloved wife to a pack of pitchfork-wielding townies at the end of the nineteenth century, Count Dracula (voiced by Adam Sandler) sets about building the ultimate haven-from-humans so his daughter, Mavis (Selena Gomez), might grow up safe from the physical and emotional harm caused by mortals.

Welcome to HOTEL TRANSYLVANIA, where monsters can be monsters.  It’s a dark but nonetheless inviting five-star fortress in the mountains where Universal Pictures’ most familiar frightening fiends can vacation without worrying about humans torching, staking, impaling, or electrocuting them.  Drac’s even constructed a nearby village, where zombie minions masquerade as monster-hating humans to help convince wandering Mavis of the malevolence her father believes she’d discover outside the castle walls.

What’s worse, Mavis takes a shine to the newcomer.  Loath to disappoint his daughter on her special day, Drac dresses the red-headed, Dave Matthews Band-loving hipster like a ghoul and passes “Johnnystein” off to the guests as the second cousin of one of Frank’s reconstituted limbs.

The monsters like Johnny, too. Unaware of his human heritage, they get caught up in the bonhomie the backpacker brings to Mavis’ party. And while Dracula is typically a consummate host, this particular soiree finds him running (and flying) about the castle in an effort to delicately distance Mavis from the outsider.

Created by the team responsible for Sony Animation’s PIRATES! BAND OF MISFITS and STAR WARS: CLONE WARS, HOTEL TRANSYLVANNIA is, in many ways, a CGI retread of Rankin-Bass’ 1967 stop-motion puppet picture MAD MONSTER PARTY, wherein an elderly Boris von Frankenstein (Boris Karloff) summons a menagerie of monsters to a castle convention to determine his successor.  But the focus of that flick is the doctor’s nerdy human nephew, Felix—who falls for sexy lab assistant Francesca.  The monsters get along with each other but conspire against Felix when it appears Baron von Frankenstein might leave the horror business to him.  A twist at the end reminds us that people (and monsters) aren’t always what they seem on the outside.  It’s a peculiarly haunting denouement for a puppet adventure-particularly one crafted by the same company that brought us all those classic Christmas television specials.

TRANSYLVANIA is like that—but different.  It encourages viewers (especially kids) to look past stereotypes, overcome prejudices, and rejoice in the dissimilarities between people rather than fear them.  Notwithstanding her fangs (and ability to transform into a bat), Mavis is a normal teenager eager to explore the world and pursue love where she finds it.  Her father is worrisome and overbearing.  Hardly new themes, there.  But TRANSYLVANIA does a nice job illustrating the perhaps not-so-uncommon trepidation of a single parent who wants the best for his child but is afraid to grant the freedom necessary seek it.  Drac has better reasons than most for smothering his kid, but it’s still an interesting juxtaposition; here’s an ordinarily bloodthirsty vampire fawning over his daughter and protecting her from heartbreak instead of heart stakes.

Russian-American director Genny Tartakovsky injects plenty of sight gags and verbal nonsense to keep it interesting for kiddies.  Frank and his wife (Fran Drescher) arrive at the castle in pieces via Fed Ex.  Wayne the Wolf has a hairy brood consisting of dozens of hyperactive little lupines.  Murray the Mummy flatulates green vapor.  Instead of “Do Not Disturb” placards, Hotel Transylvania has chatty shrunken heads hanging from its doorknobs.  Chef “Hunchback” Quasimodo (Jon Lovitz) has a pet rat that can sniff out humans.  Dracula and Johnnystein engage in a high-flying checkers match while decorating the grand ballroom, using levitating tables as game pieces.  There’s a hydra whose seven heads argue amongst themselves.

The vampires survive on blood substitutes now, like “Blood Beaters”—human blood is “too fatty.”  So parents needn’t worry about their toddlers being subjected to any TWILIGHT-esque neck-nibbling.  Dracula and his friends are cute rather than gross, and the celebrity voices behind them (several SNL all-stars) help wring the comedy inherent in middle-age monster-hood: Wayne is dog-tired from parenting his precocious pups.  Invisible Griffin is sick of not being seen, save his spectacles—which hover in the air.  The interactions between Johnny and Drac are a treasure-trove of culture shock silliness (think Dracula with an iPod) that’ll tickle kids’ funny bones.

Still, so much more could have been done with these characters and this premise, all of which would’ve served to distinguish TRANSYVLANIA from other recent “monsters-aren’t-so-bad” cartoons (MONSTERS VS. ALIENS, MONSTERS, INC.).  For every cheap laugh, the movie skips two.  Sandler is funny as the suave-yet-suspicious vampire which suggests, like ZOOKEEPER (where he voiced a monkey), he's best heard but not seen.

The Real 3D is nifty, but unnecessary.  Moms and dads might want to wait for this one on Netflix.