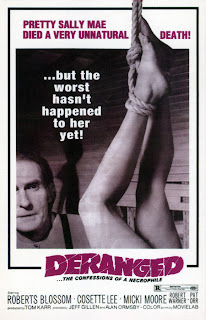 
Poor old Ezra is the quintessential mama’s boy.  When mother Cobb passes on, leaving him with a final warning to avoid those awful dirty girls, Ezra’s mind snaps.  Before long, he digs up his mother’s body and takes it home.  To keep Mrs. Cobb in good condition, Ez is soon digging up other corpses for “repairs”.  Ezra also starts to crave the company of living women, but unable to overcome his twisted upbringing it’s not long before they join the collection of stiffs in his farm house.

While all this certainly sounds grim and depressing, DERANGED is lightened somewhat by the effective use of gallows humor.  The quality of the supporting players varies, but none are so bad that they ruin the mood.  The main thing that prevents this from being a classic is the boneheaded idea of using an onscreen narrator.  Every time this guy shows up, it turns the film into cheap melodrama.  Still, if you’re a fan of low budget 70’s horror you’ll want to check this out