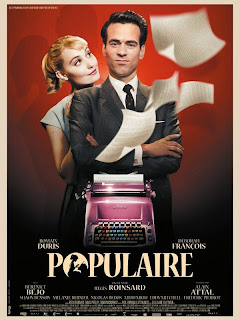 The clack-clack-clack-ding! that punctuates Régis Roinsard's POPULAIRE sets off pleasant waves of nostalgia, if, like me, you miss the satisfying sounds and feeling of a manual typewriter. A stylistic and thematic hommage to American romantic comedies of the late 1950s, the movie tells the story of Rose Pamphyle (Déborah François), a shy young woman from a Normandy village who, tired of working in her father's general store and unwilling to marry the son of the town mechanic, dreams of being a secretary. She practices tirelessly on a portable Triumph typewriter. According to Rose, “A secretary means being modern.”

She applies for a job with Lisieu insurance executive Louis Échard (Romain Duris), distinguishing herself from a room full of smartly dressed candidates by clacking away at top speed, with two fingers, on Louis' typewriter. She proves hopelessly inept at the job, but Louis sees promise in her: not as a secretary or, as she suspects, a lover, but as a contender for a title in a speed typing competition.

Competition is in Louis' blood; in his younger days, he was a trophy-winning athlete. Now, he smokes way too much and channels his competitive urge into training Rose. With its candy-colored retro design, this movie evokes an optimistic era in which business was the future, and rapid, accurate typing was a prized skill. For the benefit of younger readers, this was no mean feat on a manual machine, which had no auto-correct and would jam if you went too fast.

When Rose fails to win a local competition, Louis blames her two-finger typing method. He moves her into his house (platonically) and sequesters her until she learns touch typing. He color-codes the typewriter keys, and Rose's fingernails, to match. He assigns her intensive drills, including piano lessons and typing entire Proust and Flaubert novels. Soon Rose begins winning competitions, eventually qualifying for the national championship in Paris. She quickly becomes a national celebrity, starring in advertisements and television commercials. She seems to have achieved her dream, yet finds it rather empty. She liked typing because it allowed her to “not think,” but now it's become a chore. Also, is she falling in love with Louis?

Louis is an enigma. Handsome and sharply dressed, he has no woman in his life, perhaps because he still pines for Marie (charming Bérénice Bejo from THE ARTIST), who's married to his best friend, the American Bob Taylor (Shaun Benson). Louis and Marie were a couple before the war intervened and he lost her to the American GI.

Louis and Bob's rivalry echoes one of the movie's themes: Franco-American competition. In the same way that the French New Wave mimicked American film noir, and this movie emulates Doris Day-Rock Hudson comedies like PILLOW TALK (except it can't help but add a European tinge of melancholy). Rose posts pictures on her bedroom wall of Marilyn Monroe and other Hollywood stars she admires. The international typing competition is said to be particularly important because “France has never beaten America.” A man complains about modern architectural plans: “We didn't rebuild after the war to make this New York.” And when a Frenchman devises the “golf ball” typing element later used in the IBM Selectric, he gives the idea away to an American manufacturer and shrugs. “America for business, France for love.”

The film's faux-Technicolor production style is delightful, as is the hey-bop-a-lula rock music, although it lags considerably, running too long to support the slender story. It is nonetheless an enjoyable confection. Any movie that celebrates something as démodé as typing is, in my book, bien.   3 out of 4 stars.

Posted by Pamela Zoslov at 9:04 AM