Passion (November 1st and 2nd at the Cleveland Cinematheque) 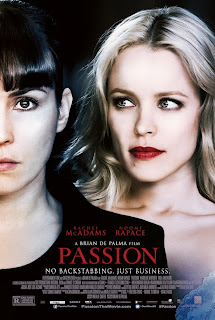 Director Brian De Palma finds himself in familiar territory with the stylish erotic thriller PASSION. It may be a remake of the 2010 French film LOVE CRIME, but like any true auteur, De Palma has made it his own both with his undeniable visual style and by rewriting the script to incorporate the themes and ideas that resonate through all his most personal work. In other words, we've got a misogynistic murder plot dressed up in Hitchcock homage and executed with undeniable skill and flair. Sometimes that skill and flair are enough for De Palma to skate by on, sometimes they aren't.

The plot takes place in the modern day world of advertising. In this milieu, executive Christine (Rachel McAdams) is a master manipulator, using her charm to get quality work out of her subordinate Isabelle (Noomi Rapace) which she then claims as her own. Christine is such a good manipulator that she even manages to make Isabelle feel sorry for her by relating a sob story about a dead twin sister. But while Isabelle may not be see what's going on, her assistant Dani (Karoline Herfurth), who just happens to be smitten by her boss, does. Further complicating matters is the fact that both Christine and Isabelle are seeing the same man, Dirk (Paul Anderson).


Of course, Christine is fully aware of Dirk's infidelity. That's at least a part of the reason why she continues to humiliate Isabelle, but the main reason is that she feels threatened by Isabelle's talent. Eventually, it seems, she pushes Isabelle too far and winds up murdered. Isabelle, who has evidently had a nervous breakdown, even seemingly confesses to the crime. But there's something more complicated going on here which makes us wonder whether Isabelle is really the puppet she's been described as, or the true puppet master.


PASSION allows De Palma to put forth a view that women in corporate culture are forced to compete with each other for power and position, often viciously, rather than help each other. It also gives him the opportunity to indulge his penchant for kinky sexual scenarios and negative lesbian stereotypes, albeit in a decidedly toned-down, almost PG-13 fashion given that this is the same guy who made BODY DOUBLE and DRESSED TO KILL. Too bad, because a little more edginess might have livened the proceedings up. As it stands, PASSION can only be described as lesser De Palma. It's certainly an improvement over his last suspense/thriller, the laughably bad BLACK DAHLIA, but that's not saying much. 2 1/2 out of 4 stars.