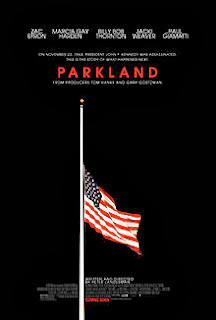 Countless books have been written and TV programs and movies made that delve into the many possible conspiracy theories about the assassination of President John F. Kennedy on November 22 nd, 1963. What tends to get lost amidst all the speculation, dubious and otherwise, is the real human impact of this tragic killing on those who were closest to it. It is this aspect of the assassination that Peter Landesman explores in his film PARKLAND.


Landesman starts with a montage of archival footage showing events leading up to the assassination, then begins his movie proper as several storylines interweave. Shot with a handheld camera to continue the documentary feel, we see Abraham Zapruder (Paul Giamatti) as he gives his staff the day off to see the President, heading out himself with his 8mm movie camera. We see the doctors and nurses at Parkland Hospital in Dallas going through an ordinary work day. We see Dallas FBI agents talking politics, and it's clear not all the G-Men like the president. And then it happens, and we rush to the hospital operating room where chief surgeon Jim Carrico (Zac Effron) and his team struggle in vain to save the President's life as Jackie Kennedy (Kat Steffens) looks on, and at one point hands the surgeons a piece of her husband she has been holding since the shooting. The scene is intense, bloody, and emotional, and even though we all know how it's going to end, the movie keeps us on the edge of our seat anyway.

As far as the actual assassination itself, Landesman is not at all interested in whether Lee Harvey Oswald (Jeremy Strong) acted alone, was part of a conspiracy, or was, as he claimed, “a patsy”. Instead he shows us the impact Oswald's arrest has on his brother Robert (James Badge Dale) and mother Marguerite (Jacki Weaver). Robert is horrified and shocked at what has happened, never doubting his brother's guilt but unable to completely abandon his flesh and blood. Marguerite, on the other hand, appears to be in deep denial, or is perhaps flat out crazy.


We also see the deep effect capturing the assassination on film has on Zapruder. Giamatti plays him as a man who knows exactly what he has on film and what it means on every level. He understands his duty to his country both in terms of making sure the investigators have access to the footage immediately, but also that it needs to be seen by the public as well, and he struggles to make sure he handles this responsibility the right way.


A true ensemble piece, there is not a bad performance to be found here. I've only touched on some of the players who make this such a riveting film experience, but Tom Welling, Billy Bob Thornton, Jackie Earle Haley, Marcia Gay Harden, Colin Hanks, and Ron Livingston all make substantial contributions as well. There is no grandstanding from any of these actors; everyone just plays for the benefit of the film no matter how large or small their part.


I really appreciated the way PARKLAND focuses on the small details, be they touching or petty, horrifying or mundane. We see the territorial turf wars between the Secret Service and the Dallas PD, the slow speed at which information traveled way back then, and the way certain decisions had to be made on the fly (like taking out a few rows of seats on Airforce One so the president's casket wouldn't have to ride below in cargo). And most importantly, we see how everyone whose life was directly touched by this tragedy was irrevocably changed. Highly recommended. 4 out of 4 stars.