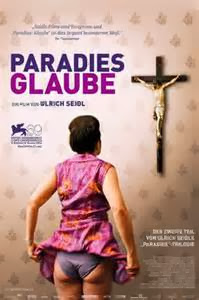 Hard to imagine things could get any worse for Cleveland sports fans. But if they do, be sure the team film is being made by Austria's Ulrich Seidl, who certainly knows how to bring one's spirits down. PARADISE: FAITH is the second in filmmaker "Paradise" trilogy. It follows a peripheral character from the earlier PARADISE: LOVE which was about fat, divorced German women visiting Africa as tourists to have sex with native gigolos.

Seidl has said the each feature in the triology pretty much stands on its own, despite constants in his severe, documentary-like filmmaking style of undadorned, static long and medium shots, no closeups or mood music, improv-heavy blends of actors and non-actors, and extreme, raw emotions.

In "Faith" a celibate, middle-aged Austrian woman, Anna Maria (Maria Hofstatter) belongs to a Catholic religious sect with Jehovah's Witnesses-like attributes. In between prayer meetings and sessions of self-flagellation venting her sexual neuroses, Anna Maria parades a statue of the Holy Virgin from one residence to another, trying to bring piety to the nation (Seidl encountered these conservative Catholic evangelicals in real life during the making of his unconventional 2003 documentary JESUS, YOU KNOW). Those who actually invite Anna Maria inside - a strung-out Russian prostitute, for instance - are often worse company than sinners who simply refuse to open their doors to her.

But the real test of Anna Maria's zeal and piety is at home, where her estranged husband (first-timer Nabil Saleh) returns home, after being thrown out by his exasperated lover. Yeah, women and their smart choices; don't ask how this happened (how did Katy Perry and Russell Brand happen?), but the ex is a Muslim Egyptian, confined to a wheelchair. He alternatively cajoles Anna Maria for sex or denigrates her religion and berates her for being a "whore." By the way, Muslims, that "Arab Spring" of yours, how'd that go?

Though Seidl might be accused of shock tactics (there's a kitty cat in plot whom one truly expects will meet a particularly ghastly fate; amazingly that doesn't happen, unless it's in the Director's Cut) he also dramatizes the agonies - which are far more evident here than the ecstasies - of living a devout mission and maintaining a "Christian" existence. No matter what. It's a tough picture to watch - as was the squirmworthy PARADISE: LOVE.

I cannot tell you what the third in this emotionally agonized, NC-17-begging trilogy is. But the choices are pretty obvious, aren't they? PARADISE: INDIANS, PARADISE: BROWNS or PARADISE: CAVS.
(3 1/4 out of 4 stars)