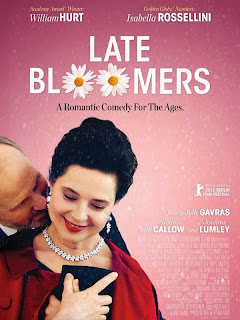 Beware what you wish for, you may get it... Okay, savvy readers will know by now that an opener like that can only mean two things. Either Charles is going to discuss his dismal romantic life, or he'll bemoan a rare motion picture actually made for grownups that still disappointed.

Since it's nowhere near Valentine's Day, you are all in luck, it's the latter. LATE BLOOMERS is a feature expressly meant for a viewing demographic older than 13- to 24 year-old male misogynists. Speaking of which, I just finally got around to eyeballing SEVEN PSYCHOPATHS, for example. Probably got a big thumbs-up from Maxim or FHM. Ugh, where is Alan Smithee now that we need him? And there's a lot more where that came from, often worse.

On the other hand, Un film de Julie Gavra, LATE BLOOMERS is a Belgian-UK co-production (filmed in English) about senior-citizen blues. No objection so far; there was an opening-nite movie at the Cleveland International Film Festival once, A FISH IN THE BATHTUB, with Jerry Stiller and Anne Meara, that was terrific. Alas, this one's just a fitfully engaging dramedy.

Retired London teacher Mary (Isabella Rossellini) has the so-called senior moments in more ways than one. She obsesses about her aging face, mind and body, not getting much satisfaction in water aerobics. She is crestfallen when she goes back to work and discerns she is being condescended to as the "token" old lady at the office.

Her husband Adam (William Hurt, with a British accent that comes and goes) is a respected architect who, on the heels of his recent lifetime-achievement honors, learns that his firm is dying financially. He's told the big-money contracts go to brasher and, yes, younger designers, and Mary cynically views his big ceremony as more funereal than anything else. Their 30-year marriage grows cold, as Adam secretly huddles with his junior designers on a scheme to present a game-changing concept in building assisted-living homes. Meanwhile Mary moves into her own place and gets flirty with other men.

The ultimate message is tres European-flavored: a bit of clandestine, restorative adultery does the folks a world of good (maybe this film would have gone farther in the marketplace with a big thumbs-up from Bill Clinton). Perhaps the open-marriage idyll is a more realistic solution than those Hollywood aliens in COCOON, but that's about it. And, considering that an online tabloid site recently praised Woody Allen and Soon-Yi Previn as one of the few solid and healthy showbiz marriages (if that's satire it's prizewinning), I have a little trouble swallowing the thesis anyway.

Supporting roles bring on such welcome faces as Simon Callow and Joanna Lumley, who, like the principles, have their moments delivering lines of world-weary intellect and intelligence, not merely uttering comic-book catchphrases. But it still doesn't kick anything into gear, sorry. At the most the movie is a painless way to spend 90 minutes or so, and at least you won't hate yourself for it afterwards. Still, one might wish for more from the aging baby-boomer genre, for all that. (2 1/4 out of 4 stars)