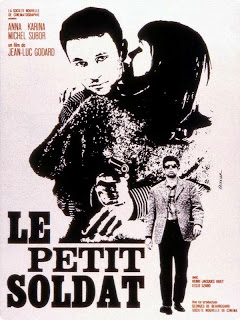 I could get to learn to like this Jean-Luc Godard person. I must confess, the first time I saw BREATHLESS, in the context of a college film class, when I was still young enough to be stupidly optimistic about things, my reaction was that of an unimpressed disciple of the Lucas/Spielberg generation. So this is the great Godard I've heard so much about? This is BREATHLESS that shook the film world? Security-camera-like BW cinematography? Ragged editing? No sound or crude audio in long bits? Little evident budget (Eiffel Tower in the background...so what? These guys lived there anyway). Godard's French New Wave masterpiece just left me cold.

Now, decades later, after I sat through countless hours of bigscreen blockbusters, $200 million budgets, empty-headed digital f/x, MTV computer-editing, bombastic music, theme-park-material plots, scripts written by marketing committees, and plastic-surgeried actors, I kind of get it more. How Godard electrified audiences (well, critics more so, I suspect), with his guerilla-style low-budget shooting that still was too stylish and self-consciously quirky to be documentary, with his Tarentino-like mix of B-movie pop-sensation and intellectual depth. (and the ability to shock). I'm not certain I'm a convert, but watching his second feature after BREATHLESS, released in 1958 as LE PETIT SOLDAT (translated as "The Little Soldier"), I was a tiny bit more entertained.

(Then again, my grades no longer depended on what I thought about it. That's the trouble with college - that and the fact that the degree won't get you an inch closer to a job anymore.)

A deadpan, faintly absurdist spy movie, set in Geneva during France's colonial war in Algeria, LE PETIT SOLDAT is narrated in by Bruno Forestier (Michael Subor), a 26-year-old agent posing as a photographer, whose voiceovers tend to state the very obvious ("...I lit a cigarette..." "...She lit a cigarette...") and the not-so obvious ("A woman's shoulders are honorable and noble"). A veritable hot war of ambush and assassination has erupted here between Arab agents and the French spooks (never mind that everyone looks pretty much alike - guys in black suits, sunglasses and ties), and Bruno, in the employ of a old-time Nazi sympathizer, is supposed to kill a top Arab operative.

But he is badly distracted in his mission (and thus falls out of favor with both sides) by the tempting Veronica (Anna Karina), a Danish-Russian girl secretly working for the Arabs. On this somewhat addled framework, Godard drapes a lot of mildly tongue-in-cheek Godardian dialogue and epigrams - shoutouts to favorite intellectuals and directors, quotations from novels, evaluations of classical composers and Impressionist painters, and left-wing Marxist sloganeering - all rather unlikely stuff coming from the mouths of French combatants in an Algerian war that is to France what Vietnam was to the Americans. Think of it as similar to when Quentin Tarentino's hit men talk about pop-culture trivia to excess. This is the movie in which the hero utters a famous Godard quote, that film "is truth at 24 frames per second."

Politically LE PETIT SOLDAT was pretty hot stuff in 1958, banned for several years by France for the Algerian War content. I must be honest, I still couldn't quite tell what was seriously meant and what was Godard just goofing on cinematic conventions (or showing off the incredibly cute Anna Karina, to whom he would Hollywood-briefly be married).

One bit that stands out today as particularly timely: Bruno gets tortured by the Arabs in a hotel room, grueling stuff that includes waterboarding - yes, waterboarding - in close detail. Bush and Cheney give LE PETIT SOLDAT a big thumbscrews-up! I can't say as I am in agreement, as a little bit of this seems to go a long way, even at a mere 88 minutes. Still, the picture has a vibrancy that still endures over time. How many of the showbiz sludge that's in our mall multiplexes today will be in re-released 55 years from now? (2 3/4 out of 4 stars)