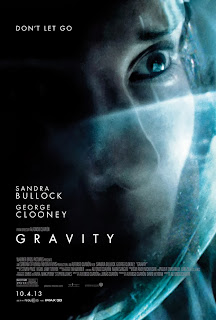 Dr. Ryan Stone (Sandra Bullock) is an engineer on her first space shuttle mission. She's been brought along to implement some piece of technology or other that she had a hand in designing, but none of that is of any real importance. Ryan does her best to remain all business and get her job done even though she's feeling a bit queasy, while her fellow astronauts Shariff (Paul Sharma) and Kowalski (George Clooney) are having a blast. Especially Kowalski, a veteran astronaut set to retire after this mission who is probably having a little too much fun with his jet pack. Then suddenly a freak accident takes place that all but obliterates the shuttle and sends Ryan and Kowalski hurtling through space. Kowalski manages to get to Ryan using his jet pack, but their only hope of survival is to make it to the international space station before Ryan runs out of oxygen and/or Kowalski's jet pack runs out of fuel.

Clooney is his usual winning self, but this is really Bullock's show. Not unlike such similar one-actor survival thrillers as BURIED and 127 DAYS, it's all about how she copes with her situation and transforms herself through it. I've never been a huge fan of Bullock's, largely because she tends to star in so much middle of the road crap, but she is outstanding here.


Thanks in large part to Alfonso Cuarón's assured direction, GRAVITY is a taut little thriller elevated by some nicely realized special effects and gorgeous cinematography (or whatever you call it when most of what's on screen was created in a computer). It offers plenty of visceral thrills while still containing enough food for thought to satisfy on an intellectual level, and manages to tell a completely satisfying story in 90 minutes, an art that has seemingly been lost. Is it best of the year material? Well, we're just at the start of Oscar season and hope springs eternal, so we'll have to see. But whether GRAVITY winds up on my list or any other critic's list of the Best of 2013, it's still very much worth seeing, and if at all possible, seeing on the big screen. Even in 3D, as this is one of the few films to utilize that gimmick well.   3 out of 4 stars.