Europa Report (October 19th and 20th at the Cleveland Cinematheque) 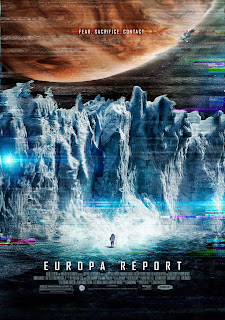 A privately funded space mission sends six astronauts to Europa, one of the moons of Jupiter in EUROPA REPORT. The film is uses a mockumentary/found footage approach to tell the story of what happened. Dr. Unger (Embeth Davidtz), the CEO of the company that funded the mission, serves to narrate and put the footage into context with another scientist (Dan Fogler) occasionally chiming in with tidbits of information. Most of what we see, however, is the footage shot by the various cameras on board the spacecraft and attached to the space suits of the crew. As the tale unfolds in a not entirely linear fashion, the film does a fine job at conveying the romance, the terror, and the boredom of space travel, and most importantly, the reasons why the incredible risks are worth it.

EUROPA REPORT sets out to present its tale in as realistic and believable a fashion as possible, and succeeds on that front quite spectacularly. By Hollywood standards it's fairly low budget, but nonetheless comes across as quite convincing. Not only does it look believable, but the screenplay feels quite plausible as well. There's certainly more action than the average Apollo mission ever experienced, but nothing that feels contrived in the context of the story. The strong cast is comprised of veteran character actors, almost all of whom you've probably seen even if you don't immediately recognize them, which in a film aiming for reality can only be a plus.


There's precious little one can criticize EUROPA REPORT for unless you're one of those people who just flat out don't like the mockumentary/found footage format (for what it's worth the footage is all steady since it's supposed to be shot by mounted cameras, so nothing that will make anyone seasick). The tone is serious, at times even a little downbeat. Because of that I couldn't help but be reminded of the 1950 sci-fi flick (and target of derision on TV's Mystery Science Theatre 3000) ROCKETSHIP X-M. The major difference, of course, is that EUROPA REPORT is made with considerably more competence, and doesn't have any radioactive cavemen. Even without the cavemen, there's still plenty of action and thrills to be had, and without sacrificing the intelligent science fiction premise. 3 1/2 out of 4 stars.