[ESCAPE FROM TOMORROW  opens in Cleveland on Friday October 10th exclusively at the Cedar Lee Theatre.] 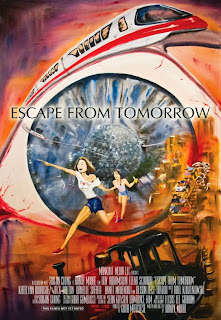 There is already considerable buzz about ESCAPE FROM TOMORROW, the debut feature by writer/director Randy Moore. Most of the talk concerns the way in which it was filmed: Without getting permission, Moore and his cast shot a scripted feature film almost entirely within the confines of Walt Disney World, Disneyland, and Epcot, using cheap digital cameras of the sort countless other park guests were using to take vacation photos and video. As interesting a story of guerrilla filmmaking as that is, however, it doesn't really matter if the movie itself isn't worth watching. Thankfully ESCAPE FROM TOMORROW is every bit as fascinating as the way in which it was made.


As the film begins, Jim White (Roy Abramsohn) is on vacation with his family at Disney World when he gets a call telling him he's been fired. Instead of telling his wife Emily (Elena Schuber), son Elliot (Jack Dalton) and daughter Sarah (Katelynn Rodriguez), Jim decides to act as if nothing has happened and give his family an enjoyable vacation. But as the day wears on Jim seems to lose his grip on reality as happy animatronic figures morph into more sinister forms and Emily seemingly lets loose with a vicious tirade while the family rides through “It's a Small World”.

Unsure of how much he's experiencing is real and how much is fantasy, Jim continues to put on a brave facade as a dispute over which rides to go on splits the family up. Emily and Sarah head off for some of the more mundane rides while Jim and Elliot set off for the Buzz Lightyear attraction. At this point, the pair of young, pretty, and vivacious French speaking girls Jim has been noticing all day become his obsession, eventually becomes so great that Jim neglects his duties as a parent on more than one occasion.

This fairly minimal plot does resolve itself in a satisfyingly disturbing way, but the real meat of the film are the odd little vignettes that illustrate the darkness lurking beneath the candy coated fantasy. What could easily have been a dull exercise in picking low hanging fruit is rendered compelling by Moore's style, a mix of creepy Lynchian surrealism and golden age Hollywood gloss. In my case, it also helped that the film's twisted sense of humor meshed almost perfectly with my own. As for the cast, while no one is a big name performer, both Abramsohn and Shuber have extensive resumes in television and low budget film and, along with the young actors portraying their children, do a fine job at convincingly portraying a typical American family falling apart.

Sure, there are some rough edges, but thanks to the level of talent involved ESCAPE FROM TOMORROW never feels amateurish. It may have been shot on consumer grade cameras, but this just goes to show that it's not the equipment, it's who's using it. Sometimes it feels like low budget movies should be given a little bit of slack for having to make do with less, but when you see something like this, it just goes to show how little those things matter when you have a passionate and talented filmmaker who understands how to work within limitations. 3 1/2 out of 4 stars.
Posted by Bob Ignizio at 12:01 AM