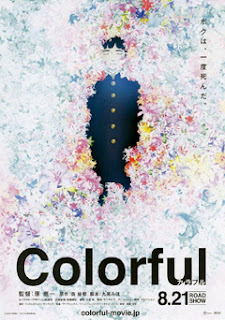 Right up there with Leo the Lion and the 20th-Century Fox logo (never altered yet to "21st-Century Fox," probably because there isn't enough money) is the distinctive emblem of Japan's Toho Studio. You know, a bluish-translucent starburst-sort of thing, that I do believe represents in the abstract the artful beauty of Japan's favorite flower, the chrysanthemum. Either that or a visual representation of the neural shock that's the last thing that flashed through the brains of Allied POWs when the honorable Imperial Japanese camp commander cut off their heads with honorable clan samurai sword.

Yes, I still have issues with the Japanese, and that Toho emblem always puts me in mind for the imminent appearance of Godzilla or Rodan. But recently I beheld it in a very different context - setting off the animated feature COLORFUL.

It takes the fantasy premise perhaps best familiar from HERE COMES MISTER JORDAN (and the Warren Beatty remake HEAVEN CAN WAIT) and Japanese-animates it. Keiichi Hara's feature is particularly noteworthy in the anime field, as having been devised specifically for the big screen as a one-shot, not adapted from prior `manga' comics that fill Tokyo schoolboy shelves.

The premise: in the melancholy-looking afterlife, that looks rather like a train station or airport (this is not entirely an original notion in Nippon cinema) a nameless soul who committed an unknown, severe sin is compelled to go back to Earth and live again, possibly achieving redemption.

Thus the amnesiac protagonist revives in the body of 14-year-old Makoto Kobayashi, an artistic schoolboy laying in the hospital after killing himself. The revived boy is assumed by his family to have made a miraculous recovery.

A strangely sinister little spirit-guide (who sort of looks like juvenile thespian David Bennent from Volker Schlondorf's THE TIN DRUM) lurks around to advise `Makoto,' but the main character is mostly on his own, piecing together for himself the Kobayashi household malaise of adultery and neglect, and the classroom drama that led up to the suicide. And, somehow, the living-dead kid has to atone.

The overlong, leisurely narrative takes a curious plot detour into...vintage trolley-car fancying (!?), and thus may lose a sizeable portion of audiences more accustomed to anime mecha action, giant robos and avenging super-schoolgirls. Still, there is forthright (but non-explicit) depictions of teen prostitution, bullying and loneliness, bringing dignity to an animated property that might have worked as a live-action feature, but gains novelty for the gorgeous cartoon presentation.

In fact, when the rather obvious "twist" ending finally comes, it seems more and more like this is exactly the sort of family-friendly Twilight Zone-esque story that M. Night Shyamalan used to do, before taking an ill-advised career dive into spectacle with THE LAST AIRBENDER and AFTER EARTH.

Even by anime standards COLORFUL is untypically restrained and serious, a bit like the non-fantasy fare from the Studio Ghibli team. Give it a try, if (unlike some of us, perhaps) you're past that whole Pearl Harbor thing. (3 out of 4 stars)