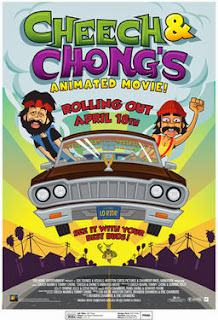 I remember growing up in greater Cleveland in the late 1970s - no, honest, I really do remember! The rest of you have no recollection of the Kucinich years because you were all stoned, drunk or wasted (trust me on this, and radio talk-show host Mike Trivisanno confirms it).

But I never was. See, somehow I got the ridiculous idea that if I stayed sober and shied away from controlled substances, no matter how much fun the media made it look, I would have an edge in the job market over the overwhelming hordes of burnouts and junkies. So I abstained. No reefer, no coke, no heroin, no airplane glue, no formaldehyde-laced joints soaked in liquid mercury injected intravenously. No, no fun at all. Four decades later I'm still looking for work. It seems this region belongs to the Cheech'n'Chong demographic after all.

Ah, Cheech'n'Chong. In between homework and classes (I really didn't get up to much anything else) I would hear about a new C&C movie coming out, following their cinematic debut in UP IN SMOKE. While local and national critics would hate the picture, my bong-wreathed peers in "high" school would stagger to the theaters just to view their doper heroes.

But the odd thing, O my brothers, is that I actually did like a lot of Cheech and Chong - those audio bits of theirs that were cleared for airplay and reached me via the radio (one luxury I allowed myself while I did homework). Their schtick from LPs such as Big Bambu and Still Smokin' were as funny as any recorded comedy and spoke very well to the duo's talents for mimicry, social satire and characterization. And a good number of the bits weren't even drug-fixated. Not that many of their fans cared. Hey! Pot jokes! Must laugh or look not cool!

Now comes CHEECH & CHONG'S ANIMATED MOVIE, and I must say it's a case of the water pipe half-empty/half full. First, know that comics/filmmakers/actors/authors Richard `Cheech' Marin and Thomas Chong now look more like University Circle college professors (except I suspect they're smarter), so they are here replaced by younger animated doubles. Remember that sad thing when TV adverts for Brisk Ice Tea did that with Frank Sinatra in his last years? So this does look and sometimes feel like a late-career cash-in.

But the plotless "animated movie" (with production credit by legendary Lou Adler), instead of having the team do the voiceovers, actually goes back to those original best-selling vinyl recordings. It takes out the choicest tracks and mates the audio to the new line-art cartoons of brothers Branden and Eric Chambers.

Bits include "Let's Make a Dope Deal," "Dave's Not Here" and running appearances by archetypal doper pals Pedro and Man, butt-sniffing dogs Ralph and Herbie, and a French-Canadian vaginal-hair crab louse (conspicuous by its absence: Pedro and Man's classic take on Christmas, "Santa Claus and His Old Lady"). So this is it, kids, for my money the pair in their prime in the medium in which they did their best stuff.

But it really is a case of the recordings working best in the theater of the mind. Sorry, Chamberses, but I've got my own interior view of these routines and yours seldom do it justice. And the crab louse isn't one of my favorites, sorry. Only near the closing routines - the two bits starring blazing-eyed inner-city Catholic-school nun Sister Mary Elephant - do imagery and audio, um, reach a good buzz together.

Yes, closing credits emphasize that nearly each voice heard, in a blizzard of characters, is Marin or Chong. Puff on that, Kids in the Hall.

So while I was left somewhat cold by the movie, the Blu-Ray (yes, I have a Blu-Ray player; see what happens when you don't spend all your money on crack?) does have some hidden-treasure stashes, including three, count 'em, commentary tracks. The best one, featuring Marin and Chong, demonstrates remarkable memory (given their performance personas) as they recall old associates, origins of gags, and tales of their many years together. Marin swears that their "Tortured Old Man" WWII-movie parody helped directly inspire Quentin Tarentino during the scriptwriting phase of INGLOURIOUS BASTERDS.

Now that stuff is addictive, more so than the movie itself. So I'm not saying that when it comes to CHEECH & CHONG'S ANIMATED MOVIE you should Just Say No, but be it known that the most worthwhile of this is the soundtrack. Soooo, anyone out there hiring, or are only meth-heads or bath-salt zombies eligible? (2 out of 4 stars)