[CBGB screens Thursday October 17th at 7:00 pm at the Capitol Theatre for one showing only.] 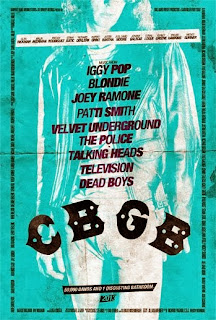 It's hard to pin down exactly when and where punk rock began – many would cite Detroit in the late sixties, some might go back a few years from that to the garage rock bands that sprang up in response to the British invasion, and others still would give the credit to the Velvet Underground in New York circa 1964. But perhaps the strongest claim for punks birthplace, at least as the genre is generally known, could be made for the music scene that coalesced around New York rock club CBGB which opened its doors in 1973.

The new docudrama CBGB sets out to tell the story of the legendary rock venue, its eccentric owner Hilly Krystal, and the influential music scene it nurtured in as silly and superficial a way as possible. As the film blazes through the formative years of the club, there is little attempt to provide historical or cultural context explaining why the punk rock scene at CBGBs happened when and where it did, or why it mattered, nor does it seem particularly interested in providing a compelling portrait of Kristal (Alan Rickman). Instead filmmaking partners Randall Miller and Jody Savin prefer to focus on wacky hijinks and the most juvenile shock value aspects of punk rock.

The greatest beneficiaries of this approach are Cleveland expatriates The Dead Boys whose notorious live act included lead singer Stiv Bators (Justin Bartha) cutting and strangling himself. The group also engaged in a fair share of offstage antics such as guitarist Cheetah Chrome (Rupert Grint) proving to a record producer that he's a natural redhead, and Bators adding his own secret ingredient to the club's house chili. And then there are the Spinal Tapian disasters that seemed to plague the band. It's primarily for these reasons rather than the band's not inconsiderable musical legacy (their “Sonic Reducer” has to be one of the most covered punk rock songs of all time) that the Boys wind up with far more screen time from their better known CB's contemporaries such as Blondie, the Ramones, and Talking Heads. Of all the musicians depicted in the film, only Malin Ackerman as Blondie's Debbie Harry comes close to getting as much non-performing screen time as Stiv and Cheetah.


The fact that CBGB isn't a thorough history lesson should come as no surprise to anyone used to watching Hollywood movies “based on a true story”, and it's not necessarily a fatal flaw. Turning punk rock into a safe, lighthearted romp isn't likely to please most of the folks who would actually consider plunking down their hard earned cash to see this in a theater, but on a strictly objective level one can see the possibility to at least make an entertaining film, although for whom I'm not sure.

The film even fails at conveying the energy and freshness of the music itself by opting to have actors mime to studio recordings made some years after the time frame depicted here when the bands were more polished and radio friendly. In the case of the Ramones, we don't even get to hear an actual Ramones song; instead we get a Joey Ramone solo song from 2004.

The only conclusion one can draw from this film is that its makers didn't really have any interest in or knowledge of the subject, nor did they have any idea what story they wanted to tell within their chosen setting. There's no real story here, just a collection of scenes that barely hold together. Given the lack of care, it's almost appropriate that the movie ends with a scene involving not one of the countless great NewYork based bands that Hilly Kristal and his club helped find a place in music history, but with a more mainstream British band playing on the CBGB stage, as if booking them early in their careers was somehow a more substantial achievement. 1 out of 4 stars.


Those genuinely interested in the history of CBGB and the New York punk scene of the seventies are advised to check out either Legs Mcneil's book 'Please Kill Me' or Clinton Heylin's tome 'From the Velvets to the Voidois: A Pre-Punk History for a Post Punk World' (which includes a section on the Cleveland and Akron proto-punk scenes of the seventies). Or watch the excellent VH1 documentary NY77: THE COOLEST YEAR IN HELL, which among other things covers the New York punk scene and gives you plenty of context.
Posted by Bob Ignizio at 12:00 AM