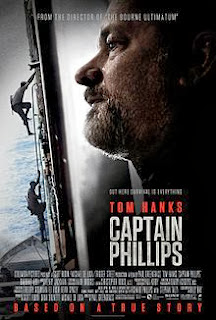 Heroes are more likely to manifest themselves in the unassuming forms of paramedics and preschool teachers than combat-ready army Rangers or caped Kryptonian musclemen.  Real-world hostage situations are rarely diffused by knife-hurling Navy SEALs masquerading as souse chefs or wisecracking off-duty cops with marriage problems and cowboy fetishes.

True-life heroes are usually revealed as everyday people suddenly thrust into extraordinary circumstances whilst going about their routines, not saviors for hire.  And it’s quite often their ability to endure hardship and hold up under pressure that makes headlines rather than the number of dead terrorists left in their wake when they emerge from the crisis.

Likewise, modern-day pirates don’t look like Johnny Depp and don’t troll for treasure chest doubloons while flying the Jolly Roger from the main mast.  High cheekbones and bad teeth only make them look, well…hungry.  Not sexy.

Captain Richard Phillips was just doing his job when pirates boarded his vessel and took him for ransom on April 8, 2009.  The middle-aged family man from Vermont didn’t karate-kick his way to freedom or eviscerate his captors, but few would disagree Phillips didn’t acquit himself marvelously during his ordeal, braving 48-plus hours of captivity alone on the high seas.

Academy Award-winner Tom Hanks delivers another Oscar-caliber performance as the steely seaman in the Paul Greengrass-directed CAPTAIN PHILLIPS.  Based on the memoirs chronicling the true events of the captain’s aquatic capture four years ago, the biopic is a taut, gritty thriller whose quick clip belies its 140-minute running time, and whose ocean-borne escapades underscore bigger issues than the mano-a-mano faceoff at the film’s core.

Expository sequences introduce Phillips as he discusses his kids’ future with his wife (Catherine Keener) en route to another charter for a Danish shipping conglomerate.  We board the container ship Maersk Alabama with the captain and follow along, shoulder-cam style, as he preps the vessel and its twenty-man crew for shipment of cargo (including famine relief supplies) for Mombasa, Kenya.  Cursory exchanges give the impression that Phillips is the sort of salt of the earth fellow you’d want for a neighbor.  He’s a no-nonsense taskmaster (it’s all business on the bridge), but on no less than three occasions he tells his men to enjoy their coffee.  When a maritime email arrives warning Phillips of an uptick in pirate activity along the Horn of Africa, he preps the Alabama by drilling his boys at their muster stations to ensure their readiness.

More interesting are scenes where we meet Somali slacker Muse (Barkhad Abdi) and his cohorts as they’re recruited by crime lords at their coastal village.  With no alternative means of upward mobility, Muse and his emaciated brethren volunteer for duty on stolen skiffs in hopes of hijacking vulnerable vessels in the nearby shipping lane.  All the khat-munching males in the village are either fishermen or pirates, if they bother rolling out of bed at all, and their gaunt frames evince their desperation like carved mahogany.  The probie pirates will surrender their bounty to their bosses in exchange for food, but bragging rights and enhanced social status are perks they can’t pass up.

The Alabama thwarts an initial takeover attempt, outpacing a pair of unfriendly skiffs in choppy water.  But Phillips’ luck run out the next day, when Muse and three other Somalis dodge the ship’s security hoses and clamber aboard.  The crew hides in the engine room, but the captain, who stands fast on the bridge, becomes the pirates’ bargaining chip when Muse is overpowered.  Rather than settle for the $30,000 in the ship’s safe, the Somalis abduct Phillips in the Alabama lifeboat and motor for home, counting on Maersk’s insurers to cough up millions for the captain’s release.

Mike Perry (David Warshofsky), Shane Murphy (Michael Chernus) and the rest of the Alabama contingent shadow the lifeboat from a safe distance after notifying the authorities.  The U.S.S. Bainbridge and U.S.S. Halyburton are dispatched to the scene but must await Navy’s Seal Team Six before taking action.  The lifeboat is completely covered; the troops have difficulty drawing a rescue plan without knowing Phillips’ precise location inside.  Later, snipers play bullet Bingo as they try to align their targets in green-colored crosshairs.

Greengrass artfully compares / contrasts the scraggly Muse with his American prisoner (whom they dub “Irish,”), the two captains becoming flip sides of a cultural coin, their fates inextricably entwined.  Hanks projects Phillips’ frustration, fear, and anger brilliantly—quite often using just his face and voice—his noble merchant mariner practically pitying his captors even as they abuse him.  Phillips uses his naval knowledge against the unseasoned Somalis, employs clever code to relay his condition to the SEAL team, and even attempts escape on his own.  But we’re as frazzled and resigned to his death as he is come the harrowing, blood-spattered climax.

It stands to reason that the United States has an economic interest in protecting its trade routes and would intervene in a stalemate, as here, deploying military hit-men to “negotiate” and “resolve” if only to discourage other pirates.  Even Phillips knows he’s but a pawn in an international chess game.

It’s heartening (especially now) to think the U.S. government would dedicate so much money and manpower to the recovery of a single individual.  But Greengrass never strays long enough from the Alabama to shed light on the roundtable discussions where (one assumes) it was determined Captain Phillips was at least as precious as his multimillion-dollar cargo and our unfettered access to the open sea.  In other words, it’s never said precisely why the Navy wasn’t at liberty to simply blow up the lifeboat and be done with it, or that they would’ve done so at some point.  It takes a lot of screen time for Greengrass’ bureaucrats to give SEAL Team Six a go-signal, when Hollywood hostage history would simply have them deep-six the villains straightaway and shrug off the death of a single civilian casualty: Collateral damage.

That said, Greengrass craftily amplifies the drama with choice shots, juxtaposing frail, dehydrated humans with heavy machinery (the ships) and high-tech (surveillance drones and infrared rifles).  The English journalist-turned-filmmaker already has a rep for his convincing real-world action, having trained his lenses on terrorism and espionage before in UNITED 93 and THE BOURNE ULTIMATUM.  Viewers may be overcome with claustrophobia during the tense, closed-quarter segments of the second act and wince at the myriad injuries sustained by its participants.  No swordfights or major shootouts here; the visceral brutality of one lacerated foot or well-placed rifle butt to the head is enough to set us on edge.  In another disturbing scene, a pirate presses his AK-47 against Phillips’ temple so hard (and for so long) that the muzzle leaves an imprint on the captain’s flesh.

Shouting and uncertainty supplant the faux violence of wire-fu and Rambo roughhousing; one practically smells the blood, body odor, and fear emanating from the screen and recoils in disgust.  It’s this unfiltered, true-to-life approach—coupled with Hanks’ total character immersion (you forget he’s Tom Hanks)—that makes CAPTAIN PHILLIPS so damned effective. Panoramic wide shots and sweeping overheads provide a sense of scale on the saltwater as Henry Jackman’s score rattles the nerves. 3 out of 4 stars.