[BLINKY & ME screens Friday October 4th at 5:00 pm and Sunday October 6th at 2:00 pm at the Chagrin Documentary Film Festival.] 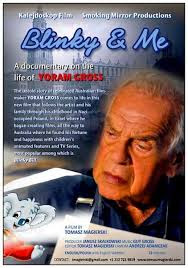 I had heard of Australian animator Yoram Gross for some time. I knew he was a big deal Down Under, and I had even seen a few of his family-oriented animated features, such as DOT AND THE KOALA and LEGEND: IN THE DAYS OF THE DINOSAURS - major hits in Aussie cinemas but just hidden-treasure small-scale releases on kidvid in the days when VHS VCRs roamed the Earth (days I miss dearly).

His cartoon work made him a household name in Down Under cinema and his koala-bear character "Blinky Bill" bids to be the Antipode's cultural equivalent of Mickey Mouse. But I really had no idea of Gross' remarkable backstory until I saw BLINKY & ME. It is much less a showbiz bio than a reflection of the 83-year-old Gross, a Holocaust survivor, looking back upon his roots in the Polish Jewish community, his struggles under Nazism, immigration to Israel, and ultimately his large, loving, farm-dwelling family in Australia (where teen granddaughters still regard Yoram as a youngster in the family).

The whole brood goes along with the elder Gross on pilgrimage back to Krakow, where the family's tour becomes ours, combining Gross' narration (which is sometimes in subtitled Polish, sometimes in heavily accented English). Evocative pre-WWII photography and Yoram's memory resurrects a lost world of cosmopolitan Polish Jewry. Gross remembers Krakow's first wave of German occupying troops and Wermacht officers as nice people, not raging anti-Semites. The bad guys came later, and Yoram's hairbreadth escapes and subsistence under protective Gentiles and secret societies (not to mention bribes) helping Jews right under the Gestapo's nose, would be an amazing tale coming from any survivor.

Clips from Gross' animation - a singular blend of hand-drawn characters against photographed backgrounds, not unlike classic Ralph Bakshi - plus the grandchildren's drawings, provide striking visual commentary. A reunion with a long-lost boyhood friend in Poland winds up the gentle story of "shoah," artistic expression and perseverance. Director Tomasz Magierski may have painted (inked?) himself into a bit of niche corner of Jewish-specialty material, rather than broader showbiz and animation appreciation, but it is a fine look into an unsung hero of `Crocodile' Dundee-land, and much more than a standard bio-of-the-rich-and-famous. (3 out of 4 stars)