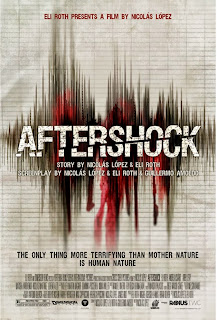 If 1974's star-studded blockbuster EARTHQUAKE were made today on a shoestring budget with a cast of unknowns by a filmmaker with a cynical grindhouse sensibility and set in Chile... well, no need to strain your imagination muscles, it's been done. Truth be told, though, whatever movie your brain might come up with would probably be better than AFTERSHOCK.


Watching the first 30 minutes of this movie is like watching poorly edited vacation videos of people you don't know and are pretty sure you wouldn't like if you did. Divorced dad “Gringo” (Eli Roth, also co-writer of the screenplay along with Guillermo Amoedo and director Nicolás López), nice guy Ariel (Ariel Levy), and arrogant big shot Pollo (Nicolás Martínez) are vacationing in Chile, partying and doing their best to pick up women along the way. Eventually the trio winds up at a disco where Pollo gets to show off his influence by helping half-sisters Monica (Andrea Osvárt) and Irina (Natasha Yarovenko) get past the doorman. There are some half baked subplots about Ariel's problematic love life, Gringo missing his daughter, and how Monica has been charged with keeping the rebellious Irina in line among distractions, but none of these things wind up mattering. I'm all for movies taking more time to set the stage and develop characters, but this is straight up padding.

The painfully boring first act of AFTERSHOCK finally gives way to action once an earthquake hits and the survivors struggle to reach safety. From here on, it's an hour of people being trampled, looting, rape, murder, and general mayhem, none of which connects with the viewer because there aren't any characters worth caring about. Even if you did somehow manage to care, let's just say that emotionally investing in anyone in this movie is likely to yield very small returns.


In AFTERSHOCK, people almost always do the most selfish thing in order to survive, and anyone who does try to help others inevitably pays a price for it. Ultimately, though, whether a person is good, bad, or indifferent has no real bearing on whether they'll be alive when the closing credits roll or not. The film becomes little more than a parade of ugliness and horror in the service of delivering the message that people suck, nature is a violent and uncaring force, and if there is any kind of God or fate or guiding force in the universe, it doesn't give a rat's ass about us.


There's nothing inherently wrong with a movie espousing that kind of message, mind you. At times I even kind of admired AFTERSHOCK's dogged determination to treat its audience with contempt. Eventually, though, the approach wears thin. It might be tolerable in a better made, more substantive film, but in what is essentially a quickie exploitation flick there has to be at least some entertainment value to warrant sitting through 30 minutes of pointless travelogue followed by an hour of unrelenting misanthropy just to arrive at a cheap shock ending. 1 out of 4 stars.