[STREET TRASH screens Saturday October 19th at the Capitol Theatre as part of 12 Hours of Terror. Event starts at 8:00 pm and goes until 8:00 am the next morning.] 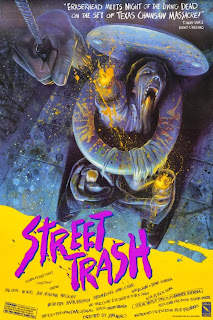 Long before he became the Steadicam operator du jour for the likes of Martin Scorsese, Jim Cameron and Oliver Stone, James Muro was known to fans of the horror genre for a film a little less highbrow. Muro, along with screenwriter Roy Frumkes, crafted a film about booze...bad booze.

Now, admission time. I haven't seen this movie in over  twenty years, so while I can hit the generalities of the plot and certainly some of the key scenes in the movie, I can in no way get into anything more subtle than that. Honestly, with a movie titled STREET TRASH, I’m pretty sure subtlety is out the window anyway. So, rather than review it, I just want to give a little love to probably the most obscure movie playing the Cleveland Cinemas 12 Hours of Terror.

A purveyor of hooch to the local bums finds a case of very old wine (labeled Viper) in the basement of his liquor store and decides that, at a dollar a bottle, its a win / win; hobos get schnockered for a buck, and he gets a little profit off some old stock. But, like I wrote earlier, something just isn’t right about this wine. On top of all the problems and mishaps that can happen when one is under the influence of too much wine, this vino also causes its imbibers to literally melt into a very sloppy, DayGlo mess.

I can’t attest to how good or bad the acting is, since its been way too long since I’ve seen it, but I do remember how amazingly offensive the whole movie is, and I don’t mean that as a negative. STREET TRASH, like KILLER KLOWNS FROM OUTER SPACE and EVIL DEAD, is one of those eighties horror movies that had ambitions that went beyond professional limitations. Hopefully this won’t seem like a cop out, but to me, shortcomings in the acting and technical areas of  a film like STREET TRASH have to be weighed against the originality, intentions, and audaciousness of  the film’s creators. In an interview with the National Board of Review of Motion Pictures, co-creator Frumkes stated: “I wrote it to democratically offend every group on the planet.”. On that level, I suppose they succeeded with flying colors (and flying penises... not gonna explain it, see the movie).
Posted by Unknown at 12:00 AM