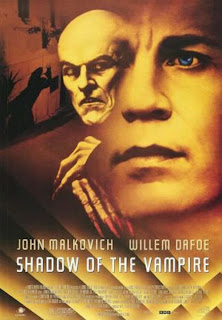 Bob Ignizio started this whole mess with a viewer recommendation of the original F.W. Murnau 1922 NOSFERATU. It triggered my memories of E. Elias Merhige's SHADOW OF THE VAMPIRE, from 2000 (meaning, naturally, it didn't screen in Cleveland until 2001).

I have to say, SHADOW OF THE VAMPIRE left me somewhat cold initially, but has mostly gained in my estimation since. Perhaps because the TWILIGHT-ing in of the vampire mythology, dumbing the genre down to digital teen-bait blockbusters, UNDERWORLD sequels and similar Marvel Comics stuff has only burnished this low-tech, low pulse-rate chiller. Which has, at least in concept, one of the Best Movie Ideas Ever, a confabulation of what might have happened during NOSFERATU's mysterious production in 1921. No high schoolers involved.


Eccentric director Friedrch Wilhelm Murnau (John Malkovich) is hailed as the answer to the genius of D.W. Griffith and Sergei Eisenstein (a boner in Steve Katz' script; Eisenstein was barely known at the time). Determined to bring verisimilitude to his latest, the first screen adaptation of Bram Stoker's Dracula, Murnau takes his film company to the Slovakian peasant hinterlands, where herr direktor informs his crew that the actor he found to play the vampiric "Count Orlock" is a disciple of the stage theorist Konstantine Stanislavsky, founder of the Moscow Art Theater and godfather of "Method" acting. In keeping with the supernatural role, `Max Schreck' (Willem Dafoe) will only appear for Murnau's camera after sunset, already in full makeup and costume, and will not socialize with other actors.

The delirious gimmick: the pseudonymous Schreck is no pretentious thespian but the real thing; Murnau has somehow run across a genuine Eastern European vampire and struck a pact with the bemused fiend to star in NOSFERATU. In other words, a vampire pretending to be an actor pretending to be a vampire (and only a meanie would point out that a virtually unknown Canadian b-picture, THE UNDERSTUDY: GRAVEYARD SHIFT 2 did that same premise about a dozen years before). Sounds like a Blake Edwards musical, and indeed there are moments of graveyard humor when Schreck bargains with Murnau over which non-essential, unimportant film personnel can be sacrificed to the vampire's blood-thirst. Like the scriptwriter, for instance.

Fortunately such gags are kept to a tasty minimum, lest this material start to look like post-modern ironic horror geekbait like the SCREAM movies. Though the casting of Udo Kier (ANDY WARHOL'S DRACULA) as Murnau's agent is a cute touch.

The downside: SHADOW OF THE VAMPIRE is quite talky and mannered, lost somewhere between the film-set comedy LIVING IN OBLIVION and the Forrest J Ackerman's Famous Monsters of Filmland fanzine. Merhige's pacing is somewhat faltering and haphazard, and some bits are just plain underlit murk. While refreshingly free of "gotchya!" scare tactics or gratuitous action-chase scenes, SHADOW OF THE VAMPIRE goes the opposite route, stagy and lumpen.

When the plotline boils down to a war of wills between Murnau and Schreck, filmmaker and vampire - who are both by nature selfish, parasitic creatures whose medium is darkness, who are each obsessed with immortality and permanence at all costs - that's when SHADOW OF THE VAMPIRE is at its best. For what it's worth, even in a goblin face and clawlike fingernails, the most excellent Dafoe still doesn't have the same unearthly, beyond-human vibe that the real-life Max Schreck evokes in black-and-white in the 1922 classic. But as an explanation of how such a monstrosity got committed to celluloid, SHADOW OF THE VAMPIRE is pretty cool, in its low-key art-house in-joke way. It's fab if watched back-to-back with NOSFERATU, of course. But even more so on a double bill with another movie-lover's what-it, the  non-horror THE CAT'S MEOW, Peter Bogdanovich's reconstruction, set in the same time period, of a fateful (and fatal), real-life weekend intrigue between Charlie Chaplin, William Randolph Hearst, Marion Davies and Thomas Ince. Movie people just can't help leaving trails of bodies behind them. (3 out of 4 stars)