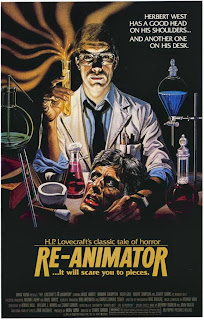 Horror writer H.P. Lovecraft is arguably second only to Edgar Allan Poe as an American master of the short horror tale. His most famous works tended to deal with scientifically plausible (at least to readers at the time) cosmic menaces rather than the supernatural. Even when he dealt with concepts like witchcraft, it was with a scientific explanation involving weird geometry. And when it came to graphic depictions of horror and violence, Lovecraft was the picture of restraint, generally suggesting rather than showing. Even at the time he wrote these tales, between 1917 and 1935, his work was considered tame compared to his more lurid contemporaries. But then there was “Herbert West, Re-Animator”, a gory serial about a medical student who has invented a serum that brings the dead back to life as violent, cannibalistic zombies, all this decades before George Romero's NIGHT OF THE LIVING DEAD made the cannibal zombie archetype the norm.

If the story was a departure for Lovecraft, the film version of RE-ANIMATOR is even more drastically removed from its author's style and tastes. It's a darkly comic romp in which fake blood flows like water and rubber organs and body parts litter the screen. There's also more than enough nudity and bizarre sexual antics to make the prudish Lovecraft blush. And yet the film's excesses are balanced by a clever sense of humor and intelligent filmmaking throughout. And where most horror/comedies fail at both their goals, RE-ANIMATOR is a spectacular success on all fronts.


The basic story doesn't stray too far from Lovecraft's plot, with West (Jeffrey Combs) carrying on his forbidden experiments at various schools before landing at the fictional New England institution Miskatonik University. The biggest change is the addition of an attractive fiancée for Herbert's assistant Dan Cain (Bruce Cabbot) in the form of Meagan Halsey (Barbara Crampton), daughter of the university's Dean (Robert Sampson). The film also gives Herbert a rival in the form of Professor Carl Hill (David Gale), who bears some resemblance to various characters in the short stories.


RE-ANIMATOR made horror icons out of Combs, Gale, and Crampton, who would all re-team with director Stuart Gordon and screenwriter Dennis Paoli on their next Lovecraft adaptation FROM BEYOND. It also managed to win over not just horror fans, but many mainstream critics who appreciated the film's wit and intelligence as much as the gorehounds appreciated its many disgusting set pieces. This is the kind of film that can somehow pull off a scene in which a body carries its severed head around and maneuvers it in such as way as to perform oral pleasure on a bound female cast member, yet somehow manages to make that seem both horrific and funny without coming across as sexist. Of course if you just read that sentence and thought to yourself, “yeah, that's not for me,” you're probably right. But for the rest of us sick and twisted individuals who have a dark streak to our sense of humor, it doesn't get much better than RE-ANIMATOR. 4 out of 4 stars.