31 Days of Halloween 2013: Poutrygeist: Night of the Chicken Dead 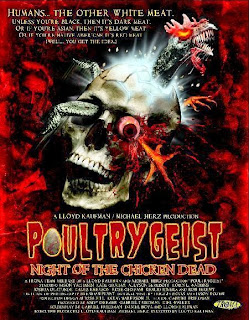 Ok, I'm not gonna lie to you folks. I'm doing a bit of recycling here. I originally wrote this review for my Myspace blog back in 2008. It's been a hectic weekend, and I just didn't have time to write anything new. But dammit, I'm not going to miss a day in this completely arbitrary and self-imposed "31 Days of Halloween" thing, so here's my review of POULTRYGEIST: NIGHT OF THE CHICKEN DEAD.

Complaining about a Troma movie being stupid and tasteless would be kind of like criticizing water for being wet; that's just its nature.  And speaking of wet, POULTRYGEIST: NIGHT OF THE CHICKEN DEAD is awash in bodily fluids, splattering blood, puke, puss and diarrhea across the screen by the gallons.  But in between the dick jokes, gay Mexican jokes, alcoholic Indian jokes and fart jokes, director Lloyd Kaufman actually goes for a few laughs that aren't of the cheap variety.  POULTRYGEIST is meant to be a satire of the corporatization of America, and Lloyd shows no more restraint when it comes to tearing big business a new asshole than he does when it comes to ripping the rectums out of his characters (which happens at least twice in this movie; I stopped counting).

The  plot this blend of political incorrectness and social commentary hangs on concerns Arbie (Jason Yachanin), a dumb schmuck in love with the considerably smarter Wendy (Kate Graham).  However, the two grow apart when Wendy goes off to college and discovers the joys of protesting and lesbian love with Micki D.(Allyson Sereboff).  To get back at Wendy for leaving him, Arbie takes a job at the American Chicken Bunker restaurant that Wendy and her lover are rallying against.  Unfortunately the place was built over an ancient Indian burial ground, and soon most of the staff and customers are transformed into chicken headed zombies as angry Native American spirits join forces with equally pissed-off poultry to seek revenge.

When I was 15 or so, Troma movies like THE TOXIC AVENGER and CLASS OF NUKE 'EM HIGH seemed really transgressive and entertaining.  Now they just leave me going, "eh".   I admire Troma for remaining staunchly independent and still managing to get their movies into theaters, but in some ways they aren't all that different from the fast food companies they take aim at here.  Like McDonald's, the customer always knows what kind of mediocrity to expect from Troma product, and there's a certain comfort in that.   So even though it isn't very good for you, if you're hungry for a Big Mac slathered with Uncle Lloyd's special sauce, POULTRYGEIST should fill you up just fine.  2 ½ stars out of 4.