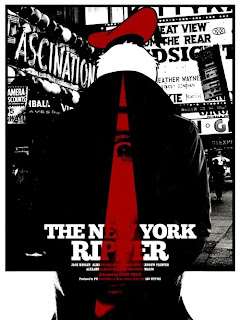 Long ago, when I was first getting into horror movies, I wanted to see everything that I could.  This would often mean that entire weekends were spent in the basement, watching as many movies as I could fit into my waking hours.  After a while, I would program my own themed movie marathons.  Sometimes I would watch a days worth of ghost movies.  Other times it would be zombie movies.  Even other times, it would be slasher movies.  Every once in a while, I would pick out what looked like the most violent movies I could find.  These would be the boxes with the sickest covers, bloodiest artwork and often directed by names which I had started to notice.  One of those names was Lucio Fulci.  Back in the day, if you wanted to see the complete, uncut version of a movie, you might have to look beyond a video store.  The description of THE NEW YORK RIPPER in the latest Midnight Video catalog made it seem as if it was a gorefest like I had never seen before.  Soon enough, I had my own bootleg copy of the movie and it went right to the top of my programming schedule.

THE NEW YORK RIPPER is about a man who wanders New York, killing people.  He even quacks like a duck while doing it.  The police are on his trail, but they really don't have a clue who he is.  This movie doesn't have a plot that is highly original.  In fact, by the time this came out, the plot had been done a thousand times over, to varying degrees of success.  What makes THE NEW YORK RIPPER stand out from all the others like it is the absurdly high level of sexuality and gore.  If you came here for sex and nudity, you have come to the right place.  There are hookers, live sex shows in old Times Square, bondage and even toe sex.  If you have come here for violence and gore, you have also come to the right place.  Characters are sliced to ribbons and stabbed with broken bottles. People are shot, stabbed and cut apart and the camera doesn't flinch away from any of it for even a second.  This movie is often maligned for how it intertwines the sexuality with it's violence, and you can be sure when there is a nude woman tied to a bed and someone appears with a razor blade that things are about to take a terrible turn for the worse.

Lucio Fulci is a name that is well known in the horror genre.  The man made movies of varying degrees of quality.  This is one of his best, most mean spirited movies.  It is dark, grim, bloody and perfect for the Halloween (or any other time of the year!) season.
Posted by Crimson Screens at 12:00 AM