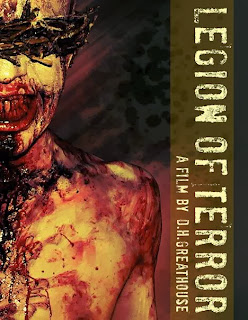 Since 1985 The Legion of Terror have been working hard to scare and disturb northeast Ohio thrill seekers at various “haunted attractions”, mainly the Bloodview Haunted House. Rather than the assortment of pimple-faced teens wearing decked out in cheap rubber masks and fake blood you might expect, the Legion come from a wide range of backgrounds. Their common bond is a desire to take their performance and make-up skills to a higher level, creating genuine characters and scenarios rather than just jumping out and shouting, “boogity, boogity, boogity!” Members are not paid for their efforts, yet most stay for many years due to the camaraderie and, in many cases, the opportunity to engage in a little venting of pent-up frustrations in a controlled environment. Given how tightly knit the group has become over the course of its existence, it's no surprise that a fair amount of behind the scenes drama takes place as well.

In his documentary LEGION OF TERROR, director D. H. Greathouse introduces us to the people behind the makeup, most of whom seem fairly harmless and well adjusted (although there are one or two exceptions) and gives the early history of how the organization came to be. Then, at about the 45 minute mark, we get into the juicy stuff. Proving that even groups comprised of outsiders will ultimately become embroiled in messy internal politics and cliquishness, a series of events leads to a number of drastic changes for the group, calling its very existence into question. Of course if you live around Cleveland, you know everything turned out more or less okay and the Legion is once again at Bloodview as we speak. Still, it's interesting to see how it all plays out.


On a technical level, LEGION is solidly shot and edited, and anyone who has an interest in subcultures should find it at least moderately interesting. It's also pretty amazing that Greathouse has been filming the group for so long (since 1996), allowing us to see how the Legion evolves over time rather than just having people in the here and now tell us about it. My main gripe is that it spends a bit too much time on too many individuals going over the same basic material, and after a while a lot of the stories about why various members joined start to become familiar and repetitious. Once the film gets into the behind the scenes material the interest level picks up considerably, but those more casual viewers who don't have a deep and abiding interest in haunted attractions and the people who work in them may find their patience tested until then. The film wouldn't have made feature length if it had been cut much shorter, but then again not everything needs to be a full length feature. 2 1/2 out of 4 stars.
Posted by Bob Ignizio at 12:00 AM