[KILLER KLOWNS FROM OUTER SPACE screens Saturday October 19th at the Capitol Theatre as part of 12 Hours of Terror. Event starts at 8:00 pm and goes until 8:00 am the next morning.] 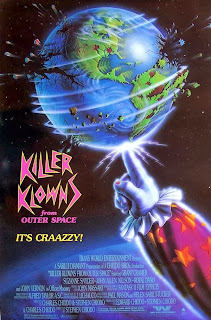 If you were going to the movies in the eighties and happened to be a fan of science fiction horror genre, then you could hardly blink your eyes without seeing a “aliens vs humans” film in one of your local cinemas. Many of these were your garden variety ALIEN knockoffs (STAR CRYSTAL, FORBIDDEN WORLD, and CREATURE to name a few), but there were also quite a few filmmakers that, rather than rely on cannibalizing more popular movies to make a quick buck, actually came up with extremely original ideas to base their films around. We had economically motivated aliens that could only be seen when one puts on “special” Ray-Ban sunglasses in THEY LIVE, red Lectroids from Planet 10 vs. a rock star/neurosurgeon/physicist/test pilot in THE ADVENTURES OF BUCKAROO BANZAI ACROSS THE 8TH DIMENSION, and sexy space vampires stealing our life force and getting naked a lot in LIFEFORCE. While we could argue all day long the overall merits of these three films, one thing is for sure, they are great examples of wide open imaginations on display in eighties movies. That leads us to the downside that all three of these films, and the genre as a whole share, save one; none of them involve killer klowns from outer space.

Bursting from the minds of the Chiodo brothers (Stephen, Charles, and Edward), KILLER KLOWNS FROM OUTER SPACE is about as high concept as it comes. The citizens of Crescent Cove are as cliche’d as any you might see in movies of this period; the teenagers love drinking beer, the local sheriff distrusts the young people and can’t seem to get with times, and horny young couples are just looking for a quiet spot in the woods to make out! However, cliché is out the window once a strange circus tent appears out of nowhere near the town’s “makeout hill”. It isn’t long after that that Crescent Cove is overrun with space klowns out to turn the population into food, using their handy-dandy cotton candy guns, which encase the hapless townsfolk in a gooey cotton candy cocoon that eventually liquifies them enough to be slurped up by the silly-straw wielding aliens. Can this cosmic carnival be stopped? Will our hero and his special lady defeat the killer klowns? Will the hero’s nerdy sidekicks get laid? Does it really matter...there are space klowns turning people into cotton candy!!!

Taken as a whole, KILLER KLOWNS FROM OUTER SPACE isn’t really that great a movie. The acting isn’t terribly impressive (except for John Vernon, who shines as the mean old town sheriff), the dialogue is stilted and a bit messy, and the overall direction is bland. But, KILLER KLOWNS is is much more the sum of its parts. Working on a micro budget, the Chiodo brothers knew where to put the money (hint: it wasn’t in big time actors or highly paid cinematographers). The space clowns (designed and created by the Chiodos) are quite entertaining and still hold up onscreen after twenty odd years since the film’s original release. It’s actually quite refreshing in this age of computer generated monsters to see some good old fashioned rubber monsters, especially when they are all piling out of a tiny space car, or attacking people with their superior shadow puppet abilities.

Backing up the great effects work is a general spirit of anything goes in KILLER KLOWNS: baby space klowns that look like popcorn, check; balloons that the klowns use to imprison their victims, got it; bubble gum guns and acid pies, throw that in the mix as well! Again, it can certainly be argued that KILLER KLOWNS isn’t a great movie, but you can’t take away the fact that it’s goofy heart is in the right place.
Posted by Unknown at 12:00 AM