[FROM BEYOND screens Saturday October 19th at the Capitol Theatre as part of 12 Hours of Terror. Event starts at 8:00 pm and goes until 8:00 am the next morning.] 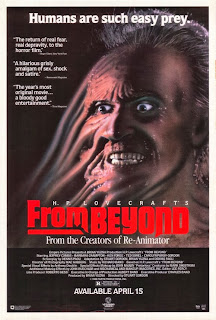 By 1986, us horror movie fans had thought we’d seen it all. Zombies taking over the world, check! A hideously burned monster that attacks us in our dreams, yep! A deformed killer in a hockey mask killing anyone that gets in his way, sure thing! A machine that stimulates the human pineal gland and turns people into sex crazed brain eaters while also opening up a dimension to another world full of terrible, nasty creatures, oh sure we...wait, what?

Jeffry Combs plays Dr. Crawford Tillinghast, the assistant to the world renowned scientist Dr. Edward Pretorius (Ted Sorel). Pretorius is working on a machine called the resonator, which he  hopes to use to open up the secrets of the pineal gland in humans. Tillinghast, working late in the lab one night, turns on the resonator and finds that, while it indeed has an effect on the brain, it also opens a portal to another dimension where creatures rule. Tillinghast reports his findings to Pretorious (interrupting the good doctor’s S&M session), who is quite eager to test the machine on himself. Needless to say, the test goes awry and Dr. Pretorius loses his head, literally. Tillinghast gets pinned for murdering Pretorius and is locked up in a psych ward.

Enter the brilliant and beautiful Dr. Catherine McMichaels (Barbara Crampton). While treating Tillinghast in the hospital, she begins to think that he may be telling the truth about the resonator and its horrifying potential. She proposes restarting the experiment with Crawford, and after enlisting the help of Detective Bubba Brownlee (Ken Foree), the three set off to explore the workings of the resonator. From there, things get really strange, but I don’t want to feel guilty giving away anything more than the base storyline of the film.

I remember the hype in horror movie circles leading up to the original theatrical release of FROM BEYOND. Gordon’s RE-ANIMATOR had turned the horror genre on it’s head with characters that were more than just fodder to add to some cliche’d movie maniac’s body count, and effects that went beyond the hack n’ slash stuff we’d been seeing for years. With RE-ANIMATOR, there’s an overall feeling that the filmmakers and cast were really trying to do something different with the horror genre. FROM BEYOND expands on these intentions, with acting that is top notch (especially considering the state of acting in the horror genre in the eighties), and effects work that is more original than most of the stuff we are seeing produced today. It’s a very ambitious film that, for me only has one flaw; maybe it tried too hard to fit all of its ideas into one film. The film gets a little choppy when Tillinghast succumbs to the power of the resonator and ends up back in the hospital, but it’s a small sidetrack that leads up to a very gooey and satisfying third act. And really, if my only complaint about a mid-eighties horror movie is that it’s maybe a little too ambitious for its budget, then it’s not much of a complaint at all, is it.
Posted by Unknown at 12:14 AM