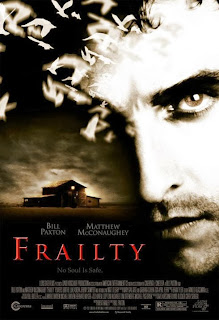 One dark night, 12 years ago, I watched a movie in my living room that made my skin crawl. During the movie the character of Adam Meiks complains that he doesn’t like to watch movies alone. I found myself relating to Adam, as this was one of those rare films when you find yourself wishing you had someone with you.

FRAILTY is a movie that has gone relatively unnoticed. Directed and staring Bill Paxton, it shows the scariest side of religious fanaticism. Outside of Paxton, who plays father Meiks (we never get a first name), the film stars a young Matthew McConaughey as Fenton Meiks (son of the father Meiks). McConaughey has recently been praised for some of his performances over the last year or so, including MUD, KILLER JOE and MAGIC MIKE. However, McConaughey’s performance in FRAILTY shows he’s always had the ability to play it calm, cool and collected.

The story is told through Fenton’s eyes as an adult. We start with Fenton admitting to FBI agent Doyle Wesley, played by the always-reliable Powers Boothe, that his brother Adam Meiks is the notorious God’s Hand serial killer and that the bodies are in the Thurman Rose Garden. As Fenton shares the story we are taken back to Fenton and Adam’s childhood.

As children, Fenton (Matt O’Leary) and Adam (Jeremy Sumpter) are raised by their father. They seem to be living a pretty simplistic and rural life. One night their father wakes them up to reveal that God had spoken to him and that from then on their jobs were to destroy demons, or depending on your point of view, murder people. God would supply their father with the names of people who need to be destroyed.

Adam, as the younger of the two boys, buys into his father’s vision quickly, but Fenton rejects it, telling his little brother that his dad made up the story, “like Santa Claus.”  Fenton hopes to run away with Adam, but every time Fenton thinks of trying, father Meiks is there. He punishes Fenton for his disobedience. Fenton is eventually left no choice to become part of his fathers “mission.”

The film is masterfully crafted. It doesn’t view father Meiks cynically. In fact Paxton shares with us the vision of an angel delivering the names. They force you to decide what is real and what is simply delusion. Father Meiks pleads with his son during the movie, “She was a demon Fenton. Couldn’t you see that?” No matter what you end up believing, and the movie certainly keeps you wondering to the end. The only certain truth is people die, demons or not.

FRAILTY could have easily turned into a vehicle against religious extremism, but opts to tell the story as equitably as possible. Even as Fenton shares his story with Agent Wesley in a straightforward manner, it’s clear there’s deeper mystery to be revealed.  Just when you think you know Fenton’s story, FRAILTY blindsides us.

FRAILTY is atmospheric in both the darkest and most beautiful ways, photographed by Bill Butler (ROCKY II, ANACONDA).  Brian Tyler (IRON MAN 3) also supplies a haunting score throughout. The direction is excellent. Paxton has only gone on to direct one more film, 2005’s THE GREATEST GAME EVER PLAYED, and it’s a shame. It’s clear Paxton has an eye for storytelling.

FRAILTY is a scary movie. It scares because it’s so clearly based in reality. No monsters, no creatures, only the question of evil in the world. Does God speak to people? And if he does, what would we do if his message were to kill the evil in the world? FRAILTY won’t answer the questions for you, only you can do that. 4 stars of 4 stars
Posted by Joseph Anthony at 12:00 AM