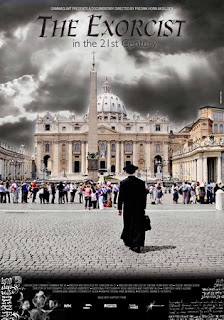 A few years ago there was something in theaters called THE RITE, a blah occult chiller, “inspired by actual events” (yes, yet another based-on-a-true-story horror picture; is there anyone besides children and Obama supporters who are still taken in by that come-on?), with Sir Anthony Hopkins largely wasted in a potboiler about modern exorcists in Italy. Frogs played an important role in it, as I recall, frogs and CGI.

THE RITE did accomplish one thing – it cultivated enough morbid curiosity in me to actually read Matt Baglia’s nonfiction book of the same title, the “true story” that Hollywood thought worthy enough to render as PG-13 demon kitsch. The book was okay, I guess, a sympathetic account of an American Catholic priest, Fr. Gary, interning with actual Vatican-approved Italian exorcists on the techniques of casting out evil spirits. It acknowledged the indefinably thin line between “real” possession and psychiatric disorders, the whole evolution and proper application of the “Roman Ritual” (AKA exorcism), the various backstories offered on Satan/Lucifer and, for me most of all, anyway, the notion that Italy is a really weird place. I don’t think I’ll go there anytime soon. That even goes for Little Italy.

There actually is a movie that better captures what the book was all on about than THE RITE ever did. It’s a Norwegian documentary, of all things, released in a convenient English-language edition on video by, of all folks, the Disinformation Company, a distributor and publisher that I associate with heavily political material. But they seem to have an occult-y side, and thus filmmaker Fredrik Horn Akselsen’s THE EXORCIST IN THE 21ST CENTURY is here to dish dirt on the devil in what for my money is a better job than your average ghost-hunter reality schlock shows on cable. The documentary’s major concession to commercialism is a soundtrack full of excessive scary-woo-woo music.

So step right up, kids, here is Roman Catholic exorcism as modern Church authorities approve its practice – though, we are told, regular clergy tend to look upon exorcists as pretty dodgy bunch of teammates. The low-key director approach generally lets viewers decide if demonic possession is genuinely paranormal/spiritual, or hokum grounded in abnormal psychology and mass-hysteria.

Father Jose Antonio Fortea, a Vatican-approved exorcist, has, along with Fr. Gabriel Amorth (a major figure in Matt Baglia’s book), performed the rite of exorcism and written books-a-plenty about evil and expelling demons. Both of them have considerable celebrity amongst the faithful. But, for a responsible opposing viewpoint, Akselsen also interviews theologian Fr. Juan Masia. This holy killjoy refutes exorcism (or the literal reality of demons, for that matter), asserting such priests are treating superstitious laity like children.

To explain the canonical New Testament passages in which Jesus Christ exorcises a woman of a hostile demon called Legion, Fr. Juan says that centuries of translators just laid their own lore and fantasies over the original Greek texts. He offers a revisionist interpretation, that Jesus was actually defending the stricken woman against mobs of males repulsed by her menstruation).

(So then, demons in the Bible are actually…PMS? Works for me, you betcha!)

One case is shown in detail here, a Columbian woman named Costanza, claiming that she’s been possessed for 15 years. This is not unusual in the actual cases, and the exorcisms themselves can be long, ongoing therapy-type sessions; it’s nothing like the wizard duels and three-act-structure mandated by moviedom.
At a tellingly rock-concert-like appearance in South America by Fr. Jose, several young, female worshippers convulse and scream, as if on cue. There are no levitations, materializations, or even `orb' photos, just some speaking in tongues, by way of fx.

The huge pop-culture influence of William Peter Blatty's book/movie blockbuster The Exorcist is mentioned, though not remotely near enough to emphasize how that one property both illuminated and hopelessly distorted the popular concept of possession, and made lots of schlock filmmakers and book publishers diabolically rich.

The short version: anyone truly wanting an inside looks at this much-Hollywoodized topic could do a, um, hell of a lot worse than THE EXORCIST IN THE 21ST CENTURY. The disc extras show Costanza's private exorcism ceremony in full. Needless to say, it’s a lot less flashy than when Geraldo Rivera brought home a ratings bonanza on the TV news hour 20/20 some time ago by airing the alleged exorcism of a girl named Gina. Remember that circus?

Now if William Peter Blatty could come out with another book telling how whatever was in Gina fled into the first host body that became available, and it just happened to be Miley Cyrus, then we can talk deal, baby! (2 3/4 out of 4 stars)