[THE EVIL DEAD screens Saturday October 19th at the Capitol Theatre as part of 12 Hours of Terror. Event starts at 8:00 pm and goes until 8:00 am the next morning.] 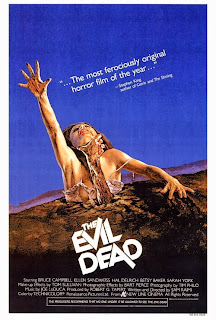 Being a child of the seventies, I was fortunate enough to grow up in the second golden age of the horror film. I wasn’t quite old enough to see the first runs of pictures like DAWN OF THE DEAD (1978), HALLOWEEN (1978), or FRIDAY THE 13th (1980) in the theater, but thanks to the combination of the VHS boom of the early eighties and liberal parents who understood that my love of the horror genre went beyond mere bloodlust, I was able to feed my horror movie addiction with almost no interference. I would wander through the horror section of Visual Adventures, my local video store, always in search of the latest and greatest in horror, hoping to find a diamond in the rough. I may as well have come across the Hope diamond of horror when THE EVIL DEAD made its VHS debut in my town in 1983.

I decided not to pop the movie into our families’ JVC video player until the clock struck midnight and everyone else was asleep. With all the lights off and the creaks and groans of a settling house to set the mood, I pushed play and set off on a journey to experience what Stephen King called “The most ferociously original horror film of the year”. The experience was certainly terrifying for me at the time. Now, thirty years later (and having had the chance to see the movie a few times in theaters with other horror fans), I can say THE EVIL DEAD not only manages to still be very effective at delivering the scares, but also holds a place as one of the most iconic films of the horror genre.

The setup of  director Sam Raimi’s THE EVIL DEAD (which was originally released theatrically in 1981) is simple enough: A group of chums take a trip to an isolated cabin in the woods to have a little party. While there, they come across a tape recording describing a hideous force that roams the woods and can only be unleashed by reciting passages from a book that, conveniently enough, is also stashed in the house. Well, words get spoken and evil forces come a’ knocking at the cabins front door! Before long, all Hell breaks loose and our gang is forced to defend themselves against some very nasty spirits!

Sure, some could say time (and a slew of knockoff type films that are more gory than scary) has taken a bit of an edge off this classic: The amateurishness of the acting and direction shows a bit, and the special effects aren’t quite up to Hollywood standards, but what one needs to understand is that this scrappy little horror film was made by a group of young men that had mountains of raw talent and ambition, but almost no knowledge of how feature films are made (Raimi was only twenty when he started production on the film). This cinematic naiveté shows throughout, and it even adds to it’s gory charm. Had THE EVIL DEAD been made by a team of professionals, it would not pack the same gritty, grisly punch that it does. The 2013 remake pretty much makes the case that bigger production values don’t make for a better film. Nothing against the remake, it is very gory, and very entertaining. The direction and effects are top notch for this style of film, but it doesn’t have the kind of low budget aura hanging around it that the original used to its advantage so well. Hail to the King, baby!
Posted by Unknown at 12:00 AM