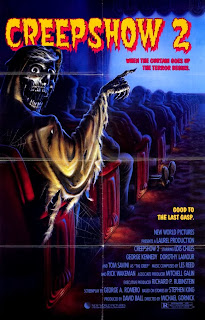 Billy stares at a delivery truck with the license plate “creep.” Inside the deliveryman is an extremely creepy goblin. Billy is waiting for his “Creepshow” comic book. The goblin delivers the comic and inside are the stories that will make up CREEPSHOW 2, a 1987 movie with all the little charms of an 80’s horror flick.

As a boy I remember watching both CREEPSHOW’s back to back on gloomy fall afternoon. And while the films certainly terrified me to never go out and swim in a lake again or caused me to ponder what might be lurking under the staircase, I was always more interested in the mood of the films, particularly CREEPSHOW 2.

The sequel to 1982’s star-studded CREEPSHOW, which was moderately successful, the movie is once again based on Stephen King’s short stories. This time around it was only written by horror legend George A. Romero (NIGHT OF THE LIVING DEAD, DAWN OF THE DEAD and generally any movie with the word "dead" in it), who directed the first film, with longtime Romero associate Michael Gornick taking over in the director's chair. CREEPSHOW 2 has no stars and less tales, narrowing the focus to three stories as opposed to the originals five. This means the stories are given more room to breath, although they’re still brief enough that they do not over stay their welcome. In between each story is a hokey cartoon introducing a new story. This is easily the weakest part of the film adding relatively little. Needless to say, if you didn’t like the original, this one will won’t speak to you either.

The first story told is “Old Chief Wood’nhead.”  It starts off revolving around Martha Spurce (Dorothy Lamour) and Ray Spruce (George Kennedy), an old couple who own a general store in the town of Dead River. Martha wants to put an end to the store, but Ray can’t let go. The town, like its name implies, has died off and there is little difference to be made there anymore. In front of the store stands Old Chief Wood’nhead, a full-figured wooden carving of an Indian chief. Ray takes great care of the chief, speaking to him as if they’re old friends. When Ray is repairing the wooden statue, Ben (Frank Salsedo), a local native in debt to Ray, arrives and asks him to keep the jewels of his tribe as a guarantee for their debts to his store. Soon after Ben leaves, his nephew Sam (Holt McCallany) unexpectedly arrives with two other men to steal his uncle’s recently dropped off jewels. Sam’s visit leads to real horror as the wooden chief becomes animated and exacts revenge on Sam and his friends. It’s a brief tale with no real twist outside of the moving statue, but it’s just short enough, and strange enough, to be memorable.

CREEPSHOW 2 also presents the story of “The Raft.”  Simply put, the story revolves around a group of teenagers looking to have a good time on a lake, a setup horror fans know inside and out.  They swim to a wooden raft floating in the lake. As they try to partake in their mischievous activities they discover a carnivorous blob in the lake that is hungry. Unwilling to take their chances swimming, the teens are stranded, unable to do anything but watch the horror around them. Of the three stories, this one offers the least to consider outside the idea that there’s something more out there in the water than sea life.

Finally, there is “The Hitchhiker.” Annie Lansing (Lois Chiles) plays an extremely unlikeable woman cheating on her husband. In the midst of her affair, she realizes she is going to be late picking up her husband at the airport. Annie begins to drive, but in her frenzy, she loses control on the road. Annie runs over a hitchhiker, but it’s a hit-and-run. As she drives on the hitchhiker begins to haunt Annie and turning her trip into a nightmare. Look for Stephen King to make a cameo in what is probably the most developed story of the three.

A somber tone hangs over the film, as is the case with much of King’s writing. The stories are fantastical, but always grounded in reality. Sometimes overwrought with grisly images, the tales offer short glimpses into oddities occurring in places all around us. It’s that feeling of connectivity that makes it feel like this could be a place you’d stumble upon. Of course, CREEPSHOW 2 isn’t caught up in societal critiques, but tends to lean towards the more obvious types of horror clichés and moral lessons. Still, the stories, for whatever reason, stick with you.

CREEPSHOW 2 isn’t a particularly well-respected film. Dismissed by many and appreciated by few. To be sure, this isn’t a classic film and it’s not the scariest, but if you have an hour and a half and feel like viewing a few strange stories, sit down and enjoy the ride. It’s safe to say you don’t need to see the first CREEPSHOW to understand the sequel. CREEPSHOW 2 is currently available on Netflix Instant. 3 stars out of 4
Posted by Joseph Anthony at 6:20 PM