31 Days of Halloween 2013: Creature From the Black Lagoon

[CREATURE FROM THE BLACK LAGOON  screens Saturday October 19th at the Capitol Theatre as part of 12 Hours of Terror. Event starts at 8:00 pm and goes until 8:00 am the next morning.] 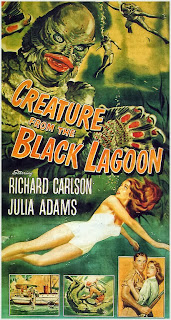 The Capitol Theatre’s 12 Hours of Terror has always done its best to cast a wide net as far as what horror films they program, and its been a pretty eclectic mix over the years. From the schlock of STREET TRASH to horror masterpieces such as THE TEXAS CHAIN SAW MASSACRE, the festival has tried to showcase the best and best intentioned films in the genre, but one thing they’ve never screened as part of the series is a classic Universal Monster movie. Well, that all changes with the fourth annual installment of the 12 Hours. This year, taking its place in the lineup as the 3D feature of the evening is the 1954 classic THE CREATURE FROM THE BLACK LAGOON.

Deep in the jungles of the Amazon an astounding find is made. A find that could rewrite the history books as far as evolution is concerned. Scientists conducting an excavation find, embedded in the rocks, the skeleton of a hand that shares both human and fish-like qualities. Expedition leader, Dr. Maia (Antonio Moreno), hotfoots it back to the states to enlist the help of his friend and colleague Dr. David Reed (Richard Carlson), an expert in aquatic life. Both Doctors then get their expedition funded by Dr. Reed’s boss, Dr. Mark Williams (Richard Denning). But Dr. Williams could care less about the science behind this trip, he sees dollar signs behind this strange skeletal hand that may bridge the evolutionary gap between man and fish.

Before too long, our three doctors are back in the Amazon. Traveling with them is Dr. Reed’s girlfriend and colleague Kay Lawrence (Julie Adams) and another researcher, Dr. Edwin Thompson (Whit Bissell), along with some assorted crew and a very crusty ship’s Captain (Nestor Paiva). Things go bad right from their arrival at the excavation site. Turns out something has attacked and murdered Dr. Maia’s assistants at the site. Undeterred, our band of scientists press deeper into the jungle, to a place called the Black Lagoon, where they hope to find links to this evolutionary mystery. Unbeknownst to them, however, they are already being watched by a strange creature that only seems to come out of the water to kill.

THE CREATURE FROM THE BLACK LAGOON is a departure from the usual Universal Monster tropes. No Gothic castles owned by vampires, and no ancient curses or mystical gypsies casting spells either. Universal crafted their first monster of the modern age with the Creature, and in true fifties fashion, the scientists, desperate to do whatever it takes to unlock (and profit from) secrets unknown to them, pay the price for their hubris. Here it may share a passing commonality with Frankenstein, but the scientists in CREATURE aren’t mad, just meddling.

And, on top of all that, it’s in 3D! And, I must saw, the process works wonderfully for this movie. This was Universal's second 3D feature and they were set on making it quality. Happy to report that they certainly exceeded my expectations. Much of the new 3D that is out now is about the depth of the image and not so much about things popping out of the screen into the audience, but The Creature From the Black Lagoon is a throwback in the sense that whenever the opportunity arises to have something come right at the audience, the movie takes it. From scary monster hands to harpoons, it all flies at the audience.

By today's standards, I suppose THE CREATURE FROM THE BLACK LAGOON is considered tame, and it is, but that's it charm to me. One of the reasons I enjoy this movie so much is that no matter how jaded I get about horror films after thirty years of fandom, watching THE CREATURE brings me back to the simplicity of what made me start liking movies in the first place. It’s not about body counts and blood and gore; its about tapping into the unknown, and THE CREATURE does it as well as any movie from its era. Whenever I watch it, it takes me right back to being a little kid in front of the tube watching SuperHost on a Saturday afternoon, getting just the right amount of scares.
Posted by Unknown at 12:17 AM