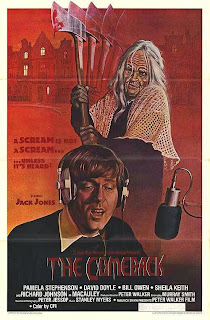 Skimming through the horror section on Amazon Prime for some suitable Halloween viewing, I came across THE COMEBACK, a seventies horror film ostensibly about a rock star being haunted by his recently murdered ex-wife and directed by British shock specialist Pete Walker (HOUSE OF WHIPCORD, FRIGHTMARE, DIE SCREAMING MARIANNE). I haven't really delved into Mr. Walker's oeuvre, so this seemed like a good choice to rectify that situation. There really aren't that many horror films from the sixties or seventies I haven't seen, so the prospect of seeing something fresh from that time period that had a good chance of not sucking seemed promising. Plus we've got one heck of an interesting cast here.

The protagonist of the film is lite rock superstar Nick Cooper (Jack Jones, a 60's pop singer who would eventually go on to sing The Love Boat theme). Nick had taken six years off after his last hit album, ostensibly to spend more time with his wife Gail (Holly Palance, daughter of Jack). Maybe a little too much time, as the two are now getting divorced. On the plus side, the end of the relationship gives Nick the push he needs to go back in the studio. That's good news to his manager Webster (David Doyle, “Bosley” from Charlie's Angels), who sets Nick up at a sprawling English mansion decked out with the latest recording gear. The mansion comes complete with kindly old caretakers Mr. and Mrs. B (Bill Owen and Sheila Keith, both with long and interesting film careers), who profess to being big fans of Nick's, and pretty young assistant Linda (Pamela Stephenson, who was on one season of Saturday Night Live and is today a clinical psychologist married to Billy Connolly), who seems poised to help Nick forget his failed marriage.


Sadly for Gail, her new life as a single woman doesn't get off to nearly as good a start. While stopping by the penthouse apartment she and Nick shared one last time, she is savagely attacked by a scythe-wielding lunatic wearing a rubber old hag mask. Since no one else is using the apartment, the murder goes undiscovered for the moment.


Meanwhile, Nick is having trouble making his new album. He hears strange sounds at night, and eventually starts seeing things as well, adding another layer of mystery to the film: Is Nick being haunted by his ex-wife, experiencing hallucinations brought on by stress, or is someone is doing a Scooby Doo routine to try and drive him mad? From here on out THE COMEBACK follows the classic giallo formula, giving us numerous potential suspects, each with their own sordid secrets.


The giallo genre was a particular brand of cinematic thriller popular in the sixties and seventies, generally of Italian origin, that tended to feature graphic and stylish violence, an undercurrent of eroticism, and a dash of dimestore psychology. Released in 1978, THE COMEBACK comes near the end of the craze for these things, and is a rarity in that it is of British origin. Although the film isn't as visually stylish as the Italian offerings of directors like Dario Argento, Mario Bava, and Sergio Martion, Walker's direction is taut, keeping the suspense and mystery going right up until the shocking (and ludicrous) conclusion. There are only a couple of murders in the film, but they're staged with a real ferocity that makes them stand out. The motives and methodology of the killer are absurd, but given the pulpy nature of the film that's just fine. It's not a lost classic or anything, but it definitely hit that seventies horror sweet spot for me. 2 1/2 out of 4 stars.