31 Days of Halloween 2013: Christine (October 19th at the Capitol Theatre) 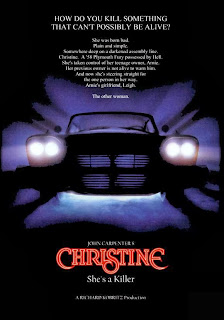 Being a bit of a car nut, movies featuring killer motor vehicles are naturally up my alley. If an opportunity arises to watch motorized mayhem, then count me in. And there have been some doozies over the years; DUEL, THE CAR, and KILLDOZER are a few that come to mind. Heck, I’ll even admit to making a fool of myself last week when I found a pristine DVD of MAXIMUM OVERDRIVE at a local pawn shop (must have been a sad day for that poor sap who had to pawn his copy of that!). While all of these pictures are great for their own reasons, I must admit to having a very soft spot for one particular movie dealing with evil motor vehicles: CHRISTINE.

CHRISTINE, directed by John Carpenter from a novel by Stephen King, is the story of Arnie Cunningham (Keith Gordon), a nebbish, nerdy high schooler who can’t seem to get it together in life. His parents hound him to no end at home, his fellow students bully him incessantly, and his only friend, the popular high school jock Dennis (John Stockwell), hangs out with him more out of pity than anything else. It’s a pretty lowly and lonely existence, until Arnie meets Christine.

Christine is a rusty old fifty-eight Plymouth Fury that Arnie and Dennis come across one day and Arnie is immediately fixated on it. Before Dennis can talk him out of it, Arnie buys the car and sets himself upon fixing it up, never getting the full and deadly history behind the vehicle he now holds the keys to. As the film progresses, it becomes pretty obvious that both owner and vehicle were made for each other. As Christine transforms from a piece of junk into a fierce looking roadster, Arnie himself undergoes a metamorphoses, from broken-glasses geek to fifties-style cool guy, and along the way, his enemies all start dying in horrific motor related accidents. It doesn’t take his friend Dennis long to connect the dots between Arnie’s motor-fueled makeover and the recent deaths of anyone that bullied him before he met Christine, but by the time he figures it out, Arnie is too far gone to save. Dennis decides the only way to stop the murders is to stop Arnie, but Christine has other plans.

Carpenter, no stranger to making movies about transformations (he was just coming off the very gooey THE THING), seems to be in his element on this one. Early scenes involving nerdy Arnie are quite effective at conveying the hopelessness of his situation, while other early scenes involving the bullying Arnie undergoes are tension filled moments that up the emotional stakes for the viewer. Special mention must go to Keith Gordon, who plays Arnie. Now a pretty well known director in his own right, Gordon really taps into Arnie’s desperation in the first half of the film, and while while his tough guy persona is a bit of a hard sell (considering his less-than-tough-guy physique) in the second half, Gordon still makes it work.

And then there’s Christine. It’s an amazing rendition of evil on four wheels, a glorious piece of deadly Detroit art that was born bad. While the car itself is very cool, the effects technicians that bring it to life are the true miracle workers here. Christine bends and twists herself back into shape after her nightly death runs with seemingly supernatural force; bumpers un-crumple and body panels un-dent themselves with some of the best practical effects work that the era had to offer. Through the efforts of these effects maestros, Christine becomes much more than a prop, it becomes it’s own character with a very specific personality.

CHRISTINE is a great thrill to watch for me in the same way that old horror movies from the fifties were. There’s a simplicity to it that makes it so easy to buy into. It’s a throwback to a time when horror movies didn’t have to be about home invasions or torture porn. It’s from a time when horror fans were maybe open minded (or naive) enough to enjoy a movie about a car that goes around killing people, but also take it seriously as a great piece of genre filmmaking. I must admit, forget the Halloween season, I would take CHRISTINE for a spin any day.
Posted by Unknown at 12:00 AM