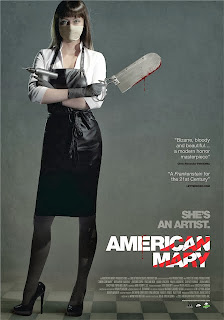 When we first meet Mary Mason (Katherine Isabelle), the protagonist of AMERICAN MARY, she is a promising young medical student with pressing financial problems. So Mary does what many young women faced with such circumstances do: she applies for a job as a stripper. As it turns out, though, Mary's medical skills are in more urgent need at the strip club than her striptease abilities. Noticing Mary's background on her resume, club owner Billy (Antonio Cupo) offers her a considerable amount of cash to perform a little impromptu surgery on a torture victim he needs to keep alive for questioning.


Mary takes the money and does the job, planning on never seeing Billy or anyone from his club again. Soon, however, a stripper from the club named Beatress (Tristan Risk), who has had some major work done to resemble Betty Boop, comes to Mary with a proposition. She wants Mary to perform some extremely unorthodox body modification on a friend of hers, so extreme that no reputable surgeon would even consider doing it. Still trying to dig her way out of debt, and with her medical career in jeopardy thanks to her scumbag professor Dr. Grant (David Lovgren), Mary takes the job. After that it only becomes easier for her to become further embroiled in the world of extreme body modification, her initial disgust giving way to pride in her work and increased self confidence. Ultimately, Mary is transformed on the inside just as drastically as any of her clients are on the outside.

It is these ideas of reinvention and transformation, and just how far one should go to achieve those ends, that is the primary concern of AMERICAN MARY. There is also a pretty harsh commentary on the kind of systemic sexism that still exists in modern society, and how male attitudes can cause some women to seek such drastic transformatons. It's rare these days to come across a genre picture with this much going on thematically, and rarer still to find one that strikes as good a balance between addressing those themes while still delivering an engrossing and entertaining narrative. On top of that, it also manages to be darkly funny and to satirize certain aspects of the body modification subculture while still showing an understanding of and appreciation for it.


That said, MARY still has some issues that keep it from being as good as it might have been. Chief among those is the degree to which Mary's professors mistreat her, which in a movie that's already gone well over the top in other areas seems unnecessarily gratuitous and unlikely. The ending also feels a bit out of left field and comes about rather abruptly as a new character suddenly enters the film to bring it to its conclusion. Overall, though, Canadian twin sisters Sylvia and Jen Soska have written and directed one of the more compelling and clever horror films of recent years, and shortcomings aside it's no surprise that AMERICAN MARY is already well on its way to becoming a cult favorite. 3 out of 4 stars.