31 Days of Halloween 2013: The Adventures of Ichabod and Mr. Toad 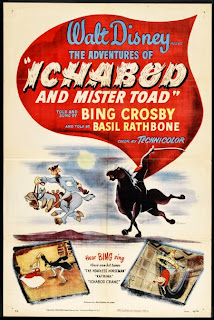 Walt Disney studios has always had a dark streak going back at the very least to the first “Silly Symphony” cartoon, 1929's “Skeleton Dance”. Those tendencies towards the spooky and the macabre continued once the studio began producing feature films starting with their 1938 debut feature SNOW WHITE AND THE SEVEN DWARFS. It may sound strange, but when the film played in Italy, where horror films were banned under Mussolini, it inadvertently inspired the many homegrown horrors that would come in the fifites and beyond with its terrifying imagery, in particular Dario Argento's SUSPIRIA. And then there's the “Night on Bald Mountain” segment of FANTASIA in which a massive demon summons all manner of ghosts and ghouls. But for me, the spooky Disney feature that had the biggest impact was THE ADVENTURES OF ICHABOD AND MR. TOAD.

The MR. TOAD half of the adventures isn't particularly scary, despite narration by noted Sherlock Holmes portrayer and sometime horror star Basil Rathbone. Rather it's an enjoyable enough funny animal romp based on Kenneth Grahame's 'The Wind in the Willows' in which a wealthy amphibian is taken with a “mania” for automobiles that winds up landing him in jail when a gang of weasels and their human leader frame him for stealing a car. There are worse ways to spend a half hour, but it's hardly Disney's finest hour.


The real highlight of the ADVENTURES is “The Legend of Sleepy Hollow”. The segment is narrated by Bing Crosby, who also provides vocals for a few musical numbers. This is a classic slow burn horror story, with the set-up of a romantic rivalry between the odd looking schoolteacher Ichabod Crane and the strong, handsome prankster Brom Bones over the affections of the lovely Katrina Von Tassel being mostly light hearted. But as Ichabod continually gets the better of Brom, things start to take a turn towards the dark and spooky.


At a party, Brom relates the legend of the Headless Horseman in a catchy as all get-out number by Bing Crosby. Ichabod, who is superstitious by nature, can't help but think about Brom's story on his ride home. The tension builds, with ordinary woodland flora and fauna taking on a frightening aspect, until finally the Horseman himself appears before Ichabod, setting the school teacher off on a ride for his life. It's all great, spooky fun that offers some genuine chills for kids without traumatizing them. Watching it again for this review, it may not have sent chills down my spine, but it certainly brought a smile to my face.


Unlike the better known Disney classics, this one doesn't get put back in the vault and revived for theatrical exhibition. In fact, it found what is arguably it's true home on TV, split in two for airings on the various Disney TV programs over the years. That's where I, and most folks in my general age group, first encountered Ichabod and the Horseman, although I never did see Mr. Toad until just prior to writing this review. And for what it's worth, I think the two tales work better separately as they don't really have much in common other than being based on literary works and having famous narrators. Nonetheless, that's the official way you'll find them now, as Disney has restored the film to its original form for home video. Overall, that would make it a 3 out of 4 star movie. But since this is the Halloween season, though, if the Horseman were do a little chopping, his segment on its own would rank a full 4 out of 4.
Posted by Bob Ignizio at 12:00 AM