[WISH YOU WERE HERE screens Thursday September 12th at 6:45 pm and Saturday September 14th at 7:35 pm at the Cleveland Cinematheque.] 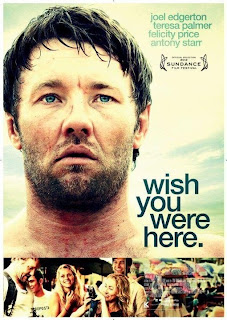 Sisters Alice (Felicity Price) and Steph (Teresa Palmer), along with Alice's husband Dave (Joel Edgerton) and Steph's boyfriend Jeremy (Antony Starr), embark on an exotic Asian vacation filled with strange experiences, strange cuisine, and strange drugs. We see the broad strokes of their trip during the credits, and it appears to be all fun and games until the sequence culminates with Dave walking alone and shirtless on a gray morning, a shell-shocked expression on his face. The film then resumes with everyone back home in Australia. Everyone, that is, except for Jeremy, who seems to have gone missing. What happened, and why is Dave acting so nervous? The answers aren't as obvious as they might at first appear.


Director Kieran Darcy-Smith, who co-wrote the screenplay with star Felicity Price, skillfully toys with audience expectations for this kind of mystery film. You may think you know where the movie is heading, but most likely you'll be wrong. However WISH YOU WERE HERE is just as concerned, if not moreso, with the effect its central mystery has on the relationships between the characters who make it back as it is in getting to the bottom of Jeremy's disappearance. As more details of the trip get filled in and certain major revelations come to the surface, the bonds of family are pushed to their breaking point.


There aren't any car chases or shoot-outs, and what little action and violence there is tends to be downplayed. Instead we have an engrossing plot and fascinating characters brought to life by top notch actors, especially the two leads. Felicity Price does an amazing job conveying a wide range of intense emotions without ever going over the top, while Joel Edgerton gives a convincing portrayal of a man trying desperately to maintain his tough guy exterior while guilt and fear threaten to break him down.


Those hoping for more of a straight forward suspense/thriller of the sort the set-up seems to promise may be disappointed. If one is willing to meet the film on its own terms, however, WISH YOU WERE HERE is a smart, grown-up drama that offers some of the entertainment inherent in the mystery genre while grappling with deeper issues. One of the year's best. 4 out of 4 stars.