The Lords of Salem (now on home video)

[THE LORDS OF SALEM is now available on home video.] 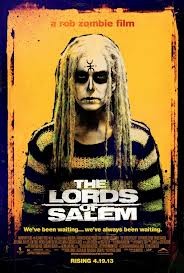 Despite the profits generated by his remake of HALLOWEEN and its obligatory sequel, director Rob Zombie's follow up THE LORDS OF SALEM came and went from theaters so quickly and with so little fanfare its likely many horror fans didn't even know. While not quite as ignominious as Ryuhei Kitamura's MIDNIGHT MEAT TRAIN and Joel Schumacher's BLOOD CREEK being dumped into bargain theaters for one week to fulfill the bare minimum contractual obligation of a theatrical release, that's probably only because all the bargain theaters seem to have closed down. And like those earlier films, the reason doesn't seem so much to do with quality (have you seen some of the films given wide releases this year?) as it does commercial concerns. Because whatever else one may say about THE LORDS OF SALEM, it is a personal and uncompromising film that cares little about appealing to mainstream horror movie audiences, nor to the die-hard gore hounds who made Zombie's first two films (HOUSE OF 1000 CORPSES, THE DEVIL'S REJECTS) respectable indie hits.

The film's protagonist is popular Salem, MA disc jockey Heidi Hawthorne (Sherri Moon Zombie), a recovering crack addict who co-hosts some sort of wacky talk radio show with Herman “Whitey” Salvador (Jeff Daniel Phillips) and Herman “Munster” Jackson (Ken Foree). Considering the film shows the DJs playing black metal music and other non-mainstream stuff, it's hard to believe they're Salem's top rated jocks, but hey, it's a movie. One of the decidedly noncommercial pieces of music played on the show is a mysterious record delivered to Heidi at the station credited only to “The Lords”. As the disc is played over the air, it's jarring and repetitive melody has a strange effect on female listeners. Heidi's guest on the radio show at the time, an expert on the Salem witch trials named Francis (Bruce Davison), is troubled by the record as well.


As it turns out, everything is tied in to a coven of witches led by Margaret Morgan (Meg Foster) who were put to death in Salem back in the 1600s. Not the falsely accused ones we all know about, but real “dancing naked in the woods with the black goat” kinda' witches. The kind that place curses on the people executing them that always seem to take a few centuries to gestate.


It's a pretty venerable set-up for a horror film, but Zombie manages to find a fresh take on the old plot. Similar to this year's EVIL DEAD remake, there's a subtext about drug addiction that runs throughout, but it's handled with much more skill here. Carefully orchestrated symmetrical shots ala Kubrick alternate with less fevered, more down to earth passages. Roman Polanski's work in the horror genre also seems a substantial influence, with the denizens of Heidi's apartment building (Judy Geeson, Dee Wallace, and Patricia Quinn) bearing more than a passing resemblance to Rosemary's neighbors in ROSEMARY'S BABY. But as significant and unmistakable as these influences are, Zombie never crosses the line into outright imitation or thievery as he has in previous films. This is the work of a more mature filmmaker who is growing into his own style.


A number of horror fans have groused about Zombie once again casting his wife in the film. One wonders if they feel the same way about Jess Franco working with Lina Romay time and time again, or Dario Argento's films with Daria Nocolodi. Those are just two of the more prominent horror directors who have done more or less the same thing; there are plenty more examples in mainstream film, too (you think Clint Eastwood co-starred with Sondra Locke in so many movies because she was a huge box-office draw?). The point is, artists have their muses, and when that artist is a director, they tend to cast those muses in their films.


So is Mrs. Zombie all that bad? Not really. Granted, despite having the lead role in the film she tends to fade into the background at times. But that seems to be by design. Her character is essentially a vessel for what happens, and in that context she gives exactly the performance the part demands. I still felt invested in the character and what happened to her. It also helps that the supporting cast is so strong, especially the older actresses in the film. Too many good actors like Wallace, Quinn, Geeson, and Foster tend to get kicked to the curb by Hollywood once they hit a certain age, and it's a pleasure to see them get good, meaty supporting roles here.


THE LORDS OF SALEM is a low key horror film that moves at a casual pace, relying more on atmosphere and suspense than action and gore. Those looking for a typical teenage slice and dice full of attractive young stars, jump scares, and decapitations need not waste their time. Nonetheless, THE LORDS OF SALEM more than earns its R rating with a number of disturbing and disconcerting scenes and images, including lots of decidedly un-sexy female nudity and a heaping helping of blasphemy.


Where most horror films these days seem to aim for as wide an audience as possible, Zombie has zeroed in on a relatively small group who appreciate intelligent, grown-up horror that nonetheless still has an edge to it. It's the kind of film that is destined from the start to wind up somewhere in the middle when all the critical ratings are collated on the meter of one's choice. Not because the general consensus is that the film is just kind of okay or mediocre, but because about half the people who see it will love it, and the other half will hate it. Consider me in that first half. 3 1/2 out of 4 stars.