The Bling Ring (September 7th and 8th at the Cleveland Cinematheque)

[THE BLING RING screens Saturday September 7th at 9:20 pm and Sunday September 8th at 8:40 pm at the Cleveland Cinematheque.] 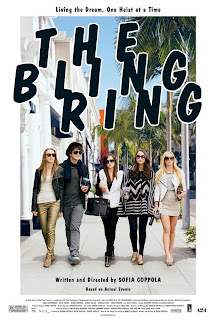 Like Harmony Korine's SPRING BREAKERS, Sophia Coppola's THE BLING RING is a commentary on how modern America's obsession with wealth and celebrity influences the behavior of young people and instills in them a sense of entitlement to the same kind of shallow “good life” they see on TV. But where Korine's film was an audacious, over-the-top work of fiction, THE BLING RING is a true story, or at least about as close to the truth as any “based on a true story” movie ever gets. The names of the guilty parties have been changed, but the basic details of their exploits hew fairly close to the facts.


Israel Broussard plays Marc, a smart but insecure young man who is sent to Indian Hills High School, sort of a dumping ground for kids who have gotten in trouble. There he meets Rebecca (Katie Chang) who instantly decides the two are going to be friends. The crime spree these two “mastermind” gets rolling when Marc mentions a rich acquaintance of his will be out of town, and Rebecca suggests they break into his house and take a few things. It's so easy that the two decide to find out when various famous people will be out partying so they can pilfer their possessions as well. Marc's planning is actually pretty clever, but Rebecca doesn't just want to have the nice things that go with fame; she wants to be famous, or at least the high school equivalent. So she tells friends and invites them along on subsequent capers, and even posts pictures of herself with some of the stolen goods on facebook. It doesn't take a genius to realize where this is headed.


The young cast gives mostly believable, unaffected performances, a nice change of pace from the type of movie teens often seen in Hollywood productions. The biggest name in the cast is Emma Watson of HARRY POTTER fame, and while one could say her acting shows through more, that's the nature of her character. She actually does a really good job portraying a person trying to emulate the affected cool of modern teen/young adult stars. Combined with her raunchy comedic turn in THIS IS THE END this past summer, she's well on her way to transitioning out of being a “child star” into an actress who should be taken seriously.


Although lacking some of the ambiguity her films are known for, there is still plenty about THE BLING RING that marks it as a Sophia Coppola film. As usual, Coppola shows a keen understanding of the world inhabited by the rich and famous as well as a pointed ambivalence towards it. Visually the film also displays Coppola's style with a soft focus otherworldliness that has characterized her work all the way back to her directorial debut THE VIRGIN SUICIDES. It may be a straight forward true crime tale at its heart, but it's a particularly well shot one peppered with relevant themes and a darkly satirical sense of humor. It perhaps follows the “darkly comic true crime playbook” a little too closely to be a great film, but THE BLING RING is still a very good one that shows Coppola can be accessible while still remaining true to herself as a filmmaker. 3 out of 4 stars.