[THE ACT OF KILLING  opens in Cleveland on Friday September 13th exclusively at the Cedar Lee Theatre.] 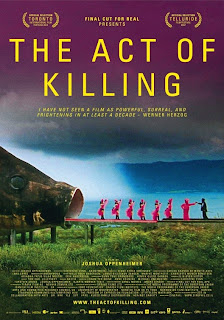 Joshua Oppenheimer’s film THE ACT OF KILLING is a harsh, disturbing, but immensely watchable film that tells the story of  a gang of Indonesian movie ticket scalpers turned cold blooded, state sanctioned murderers in the 1960’s. Sure, films like this come around every so often, and while they shock and send the mind racing to come to conclusions of how people could be so cruel, none has ever tackled the subject matter of genocide in quite the way Oppenheimer does. Rather than just interview his subjects about the blood on their hands, Oppenheimer gets them to actually re-enact their atrocities for the camera, as if they are starring in their own Hollywood production.

The main focus of the film is a man named Anwar Congo, a one time petty hood who, through the turmoil within Indonesia’s political system in 1965, was promoted (along with his “friends”) into a ruthless death squad that was responsible for: torturing and killing anyone who went against the government, extortion of local business owners, and rigging of elections. Anwar and his pals are shown around town as local heroes, loved by the North Sumatran citizens. They are so beloved that Congo and his partners even get invited onto local television shows to describe the “work” they did (with props!). Congo and his pals seem to have no problem showing how to torture and kill. In fact, they seem to relish the attention it has brought them.

It isn’t until Congo has the opportunity to actually recreate his slayings in true Hollywood fashion that the cracks in his very proud armor begin to show. For most of the documentary, he seems more than happy with the idea of directing and starring in his own story, worrying more about what the world may think of his grey hair than the fact that he beheaded innocent people on a seemingly daily basis. When he finally does start directing his stories, and meeting up with his old partners in crime, that's when you can see that maybe the marbles are starting to roll in old Anwar’s head, and that he may finally realize that he has a very big karmic mountain to climb. But Oppenheimer doesn’t let Anwar off the hook, and his camera never gives him penance for his deeds. The film couldn’t work if it gave Anwar any type of hope for escaping the dreams that secretly haunt him. The way it is, it’s certainly one of the best films I’ve seen so far this year.

Watching THE ACT OF KILLING became one of the most surreal experiences I have ever had with a film. I’ve seen dozens upon dozens of documentaries that deal with atrocities, but never one where the killers themselves were so willing, even eager to talk about what they’ve done, and not out of guilt, but pride. It’s a completely off-putting experience and I kept having to take myself out of the movie to find a kind of stable ground for my mental state before going back into Anwar’s world. It’s definitely odd to watch a doddering old man hold his grandchild with such affection and care one second and then listen to and watch him explain just the right way to strangle a man the next. There are many more experiences in the film that just keep your jaw on the floor as you ponder how someone could inflict so much pain on another person, just because he’s allowed to. 4 out of 4 stars.
Posted by Unknown at 12:00 AM