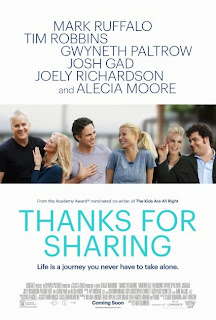 A movie about sex addicts in a 12 step program from one of the co-writers of the cloyingly quirky and overrated THE KIDS ARE ALRIGHT? Let's just say I wasn't exactly looking forward to THANKS FOR SHARING. Surprisingly, despite my hostile mindset I found myself warming to the characters and light comedic tone of the film, and even becoming invested in the more dramatic turns of the story.


The film is an ensemble piece with Mike (Tim Robbins), who has managed to abstain from extramarital sex for15, as the guy everyone at the group looks up to. He's especially close with Adam (Mark Ruffalo), who has kept himself sex and masturbation free for 5 years. He in turn has sponsored Neil (Josh Gad), an aspiring doctor who so far hasn't taken the program very seriously and who still engages in frottage on unsuspecting subway passengers. And then there's the newest member of the group, and only female, Dede (Alecia Moore aka pop singer Pink), who has never been able to relate to men in a nonsexual way.

This being a movie rather than real life, all of these characters face sudden dramatic developments in their life more or less simultaneously: Mike's addict son Danny (Patrick Fugit) returns home after several years claiming to be drug free, and while Mike's wife Katie (Joely Richardson) is happy to have her child back, Mike doesn't trust the boy, at least in part because he apparently got clean without a 12 step program. Meanwhile Adam has started dating Phoebe (Gwyneth Paltrow), a breast cancer survivor who says she hates everyone but Adam. The only problem is she says she doesn't date addicts, leading Adam to lie to her. As for Neil, he finally gets serious about overcoming his addiction when it gets him fired from his job. He finds unexpected inner strength when he has to help Dede overcome a moment of weakness. She in turn helps Neil with overcome his difficulties with the whole “higher power” aspect of the program while finding that she can be just friends with a guy.


Whether you buy into the whole notion of promiscuity as an addiction/disease, or the whole 12-step ideology doesn't really matter. The characters in the movie believe that, and the way they're written and played, we believe in them.


THANKS FOR SHARING is at its best when it keeps things light. It manages to find humor in sex addiction without making the addicts a joke. It's both amusing and kind of disturbing to see the ways in which Ruffalo's Adam is confronted with a constant stream of temptation every time he steps outside his door to go to work or just walk to the corner, and it's hard not to chuckle at the way Robbins describes sex addiction as, “like trying to quit crack while the pipe is attached to your body.”


It's in the films more dramatic turns that it stumbles. The initial setup to all the various stories and their inherent dilemmas is fine if a bit contrived, but the resolutions all wind up morphing from drama into melodrama. The postscript that wraps everything up manages to mitigate that somewhat, but its hard to deny that the movie veers into cheese territory for most of its third act. Overall, though, THANKS FOR SHARING feels sincere and good natured enough that many viewers will be inclined to cut it some slack. 3 out of 4 stars.